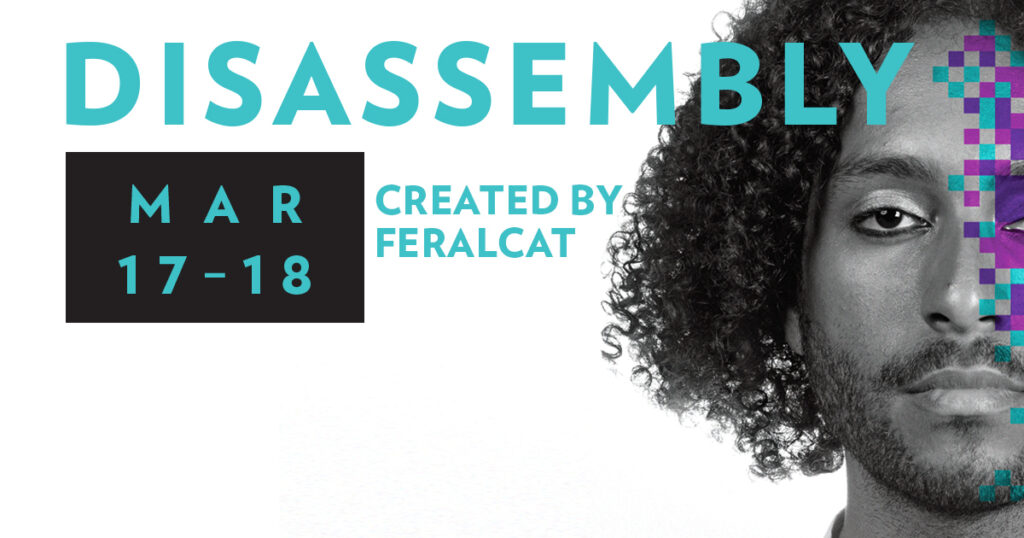 In Disassembly, an original soundtrack by Feralcat serves as the script for a sci-fi animated drama. This multimedia experience marries a synth-pop/progressive rock/jazz fusion concert with retro video game-influenced animations to tell a compelling new story about finding identity in the midst of oppression. Join protagonist Ignacio as they fight for humanity in a post-apocalyptic scene-scape where androids take over the world.

The performance is part of the New Hazlett Theater’s CSA series. There are three performances on Thursday, March 17 at 11 a.m. and 8 p.m. and Friday, March 18 at 8pm. For tickets and more info, click here.

David Bernabo: I was wondering if you could tell me a little bit about Disassembly? What are the components? What are some of the themes that you are working with?

Feralcat: Disassembly is a work that culminated from me having this bulk of music. During the heat of lockdown and quarantine, it was becoming more and more apparent that I couldn’t tour with any of the music that I had, and my intention then became to do something more interesting, more provocative that didn’t necessarily rely on a physical tour or performance of the music physically. So I started crafting a story to build around the music. It started off as this hybrid live action and animation performance and then turned into me seeing this show and seeing this music as animated cut scenes. I’d always wanted to work on making a video game and by always, I mean, I’ve just been such a big fan of especially the classic Japanese RPGs like Final Fantasy, Chrono Trigger, and Breath of Fire. I wanted to create a world that I would also want to either be in or enjoy or immerse myself in.

Beyond the progression of music, the story gets more and more intense up until the very end.

DB: What are some of the themes within that story?

F: It’s a sci-fi fantasy story, and thematically, I’ve always been interested in transhumanism and this concept of where we’re going with AI and how it’s developing into something more and more human. Big fan of Commander Data from Star Trek: The Next Generation. Basically, the existence of this character has always thrown me into well, what if there was more to it than just that? There’s limited themes of gender identity, but realistically, it all kind of culminates in a futurepunk idea where futurepunk, as opposed to something like cyberpunk, is not dystopic. It’s a utopic world far enough in the future where we no longer need gender norms. It’s supposedly utopic, but I do still play into the dystopia. Now that I think about it, I created a cyberpunk world in attempt to make a futurepunk world because I still have all these burning thoughts about what constitutes as human. What can procreate with another human? There’s not sex or anything in this show, but where will AI lead us and is it the downfall of humanity? Or is it something a little bit more nuanced than that?

DB: Those seem like pertinent questions as AI gets stronger and more realized in daily life. Do you tend to process current events or social issues through your work?

F: I guess I’m sometimes afraid to be a commentator in real life. I do often have a very aggressive Twitter feed sometimes. My main character’s name is Ignacio, and I chose that character name specifically because it sounded like “indignance” to me. The character’s arc goes through my own level of indignance and anger and like, why can’t I process these things the way I want to process them? It manifests itself in music. I write instrumental music, so there’s very few opportunities that I give myself to use words to describe what’s happening. I finally needed a chance to use words. For the most part, I write instrumental music because that’s what connects to me, but I also wanted a story and a story arc. I like writing stories. I like writing poetry. I like the idea of writing screenplays and have written short stories before. But this is the first time I’m actively trying to make something that people will see. It’s my way of not being a lyricist, but still saying the words that I need to say.

DB: How is the narrative delivered?

F: The animated story appears like a mid-90s Super Nintendo game. That’s the aesthetic of it. So the dialogue appears as a box at the bottom with a bust of a character here and a bust of a character there, where one of them will perhaps portray an astonished emote. And this one will be angry. Or sometimes they’re going to be neutral, but the emotions are kind of expressed statically while the dialog moves. There’s no voice acting. It’s a silent film.

DB: Can you tell me more about your interest in the format of video games and the use of the non-interactive parts, the cut scenes?

F: I am excited to make it more interactive, and I can’t wait to work with a game designer and a UI designer. I have a couple of game examples and references that are very narrative-driven and aesthetically similar to this Super Nintendo style like Pixel Art 2D. One of the games that I took a lot of reference from is a game called To The Moon. It’s almost entirely story-driven. You interact and you walk around as this character, but then you play this puzzle and the story itself is just very moving and very captivating. It was a short game which I thoroughly enjoy in this climate of video games, because for the last few years, companies have been creating these gigantic, daunting open world games where you have infinite possibilities of how to run here and what quest you can do. Even just now, while I was waiting for the COVID test to be done [prior to this interview], I just bought the newest Pokémon game, which is a gigantic open world game.

I wanted to lean the other way and go for a linear game with a set amount of time because I’m an adult now. When I was younger, I had infinite time and energy and creativity to go through all these puzzles. And now I’m really finding solace in games that I can find a start and end point to within three days or three play-throughs or some set amount of time.

DB: So, who is in the band for this show?

F: So as far as the animation goes, I’ve been working with a studio out of the UK called Cold Beverage Studios. I actually just found them on Reddit. I had originally had an animator friend of mine from the Bronx in New York to work on this piece. But he actually kind of blew up musically and he had a little bit too much on his plate and was no longer able to help me with this piece. But the studio Cold Beverage has been amazing. It’s a full service game production studio, so they had a storyboard artist work with me. They have illustrators and coloring artists and animators.

My bandmates, as of right now, we have Allen Bell on drums, Chris Trepagnier on bass, Aeden Simmons on guitar, Matt Elias on guitar, and my friend Irene Monteverde on the keyboards and synths. They helped me every step of the way to turn these MIDI garbles into something that makes sense with a full band. There’s always a challenge in it where something I write on keyboard makes absolutely no physical sense on the guitar. So sometimes the guitarists are like, this is a cool challenge, and other times it’s, nope, rewrite this. And I’m like, fair, that’s fine. We’ll do something else with that.

DB: You’ve been working on a lot of different music projects lately. Can you talk about your recent work?

F: I’ve been making records since I was 21, nonstop basically. Every year I’ve had a new project and something else to work towards and something else to get money funded for and more people to work with. It’s always been a little bit different with Feralcat and The Wild–that came out of a necessity. I’d been writing this music on my own, and it was the first time I was using a DAW (Digital Audio Workstation) seriously as a compositional tool. I started by writing a couple of songs and wanted to hire my friends to record them. I had a recording space in my attic. After I showed it to them and I had five or six songs ready, they were like, Yeah, I think this is a cool concept.

There’s people that make music with purpose and with intention to do this sound, this sound, and this sound and Feralcat and The Wild always felt like this is music I don’t need to make with intention. This is the music that is very much mine. I just have to be genuine and honest about it and understand the textures that I like, which are these heavy guitars and giant synthesizers and arena-level soundscapes that I wanted to project through a saxophone because I didn’t get to do that before, and now I finally got to do that.