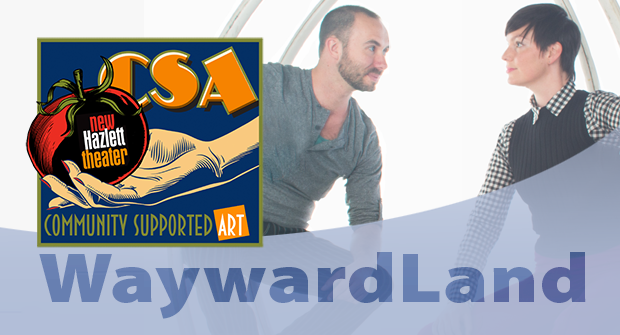 Jennifer Keller sat down with the latest Community Supported Artists, Jil Stifel and Ben Sota, to talk about their process of collaboration and creation of WaywardLand, a new work that explores metaphoric relationships between physical theater, dance, and circus.

Q:  What is the history of your partnership together?  How did you find one another?

We met in high school.  The cool thing is that the first time we worked together was at the New Hazlett, in our early 20’s, dancing with Attack Theatre in 2005.  Then we performed “Faust” together for the Pittsburgh Opera.   Attack Theatre and Zany Umbrella Circus were performing at the Three Rivers Arts Festival, so our paths were crossing a bunch in Pittsburgh.

Q:  How do you approach the concepts of collaboration and/or fusion?

Jil:  My ideal for collaboration is that the final product exists as a special entity that could not have been created without the specific vision of each collaborator. In my career I have worked more frequently with visual artists and musicians; this journey into co-directing the movement and arc of a work with Ben is new and exciting.  The collaboration grows from our collective interests and what is happening around us at the time of creation. There is an inherent excitement and charge as we find the intersections between our interests and approaches as different disciplines hybridize to create something new. 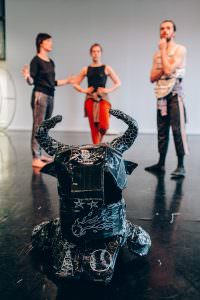 Q:  What does your collaborator bring to the process that has served as a catalyst for your own creative thinking about this piece?

Jil: Ben’s process embraces the freedom to create in an authentic/emergent way that asks questions and follows tangential impulses as a pathway to uncovering the unexpected. This way of creating is incredibly satisfying because we are constantly discovering the work and allowing it to crystallize and to speak to us. Working with Ben feels very natural; we have similar goals in our work and shared interests. I have always been incredibly inspired by Ben both as a performer and as a director. When he is performing he draws the audience in allowing them to have an experience of what he is creating rather than just watching from the outside. His gentle demeanor and powerful presence are infectious both in life and in performance. As a director Ben has a way of creating images and surprises that hold the audience spellbound in a state of constant discovery. His ideas are impossible to me at times but I trust and watch and wait. When the impossible becomes possible I stand back enjoying the moment of discovery and magic that settles around us.

Ben:  Jil as a mover brings movement that is subtle, explosive, dynamic and she has a style that resonates with both dancers and non-dancers.  The movement is authentic and lives in the moment – the moment is inclusive and exists in a down home place.  Jil values her strengths and weaknesses – this is a hard thing for an artist to do.  She has lived through the unimaginable and despite hardship she still dances.  She really values every rehearsal and every moment we have and that electrifies her work.  Jil as a choreographer uses all of her resources and keeps asking the important questions.   Big questions, little questions, provocative questions, humorous questions.  Whenever I’m figuring a part out, she listens and then says ‘yeah and could we try adding this to it?’  Goodness yes – these are my favorite parts of rehearsal.  When Jil says these words I know we’ve discovered something unique.  I think a good choreographer/ director notices what their collaborators are offering and organizes them.  In rehearsal it often feels like we’re on the hunt.  We’re on a very exciting adventure and the piece constantly becomes more charged at every moment in an unlikely way.  Time and time again over the one-year rehearsal process I’d think this really isn’t going to get any cooler, and time and time again my thoughts would be proven wrong.

Q:  In this work there is trapeze, German wheel, a rope, masks, gesture, stilts, and large scale movement.  Are any of these elements evolving to something else as you’ve worked together over the last six months?

Ben:  The circus elements are always evolving the piece, but perhaps in a different way than you’d expect.  Instead of becoming high octane and encouraging force and spectacle, the circus elements are encouraging the piece to have greater sensitivity.  Ideally the circus props become a magnifying glass that teases out and funnels our humanness.  Sometimes it seems that working with these elements is akin to baking with blow torches – we could very easily destroy our project, but it also is incredibly exciting to explore these non-traditional tools.

Jil:  One of the profound things about creating this show together has been the significance of weaving circus into a piece that is constructed in many ways from the perspective of physical theater and dance. We’ve slowed down some of the tricks and momentum based things.  As we explore the various apparatus — that for some of us are brand new, and for Ben are old friends — we have asked ourselves why are we choosing the apparatus, where does it fit into the arc of the show, and how does it fit each performer’s role?  Ultimately the apparatus [has evolved] in a way that exposes our reliance upon each other, creating a greater metaphor for our human desire to be supported and to be part of a community.  When we do the trapeze, you literally see us hoisting Ben into the sky.  His life is in our hands.

Q:  What challenges have you faced as a creators and performers in the work?

The main challenge is rehearsal schedules with people that are on the move.  That is 90% of the challenge.  That being said, it’s helped us form the piece with long marination periods, and in a weird way it’s been really good.  We’ve faced our challenges with the mantra “be yourself.”  When Ben learns a dance phrase, it can get pretty damn scary.  When Jil is in the German wheel, we say the mantra.  We have had to live in uncomfortable places in this piece, and take leaps into the unfamiliar. 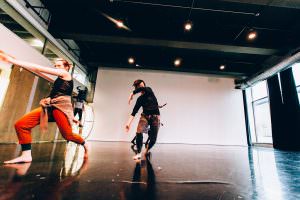 Q:  What has been easy about the process?
Jil:  Ben and I seem to approach making stuff in a similar way.  It’s almost been surprising how fluid the process has been in terms of working together.  One person will have an idea and we’ll try it.  There has been a natural back and forth that has been exciting.

Ben:  Our aesthetic is surprising similar.  There’s a difference between “being” versus “doing.”  Jil and I are “be-ers.”  We’re not putting on a façade.  We’re letting things happen to us that are genuinely interesting.  We’re not trying too hard, just teasing out what’s already in existence.  We are working with minotaurs and stilts:  they are dynamic elements, and there’s so much there already that “to be” is a great choice.  We don’t need to glam it up more.  Am I sounding crazy?

Jil:  No…Some of the material is set, but it maintains its authenticity.  We have a reverence for the individual and an understanding of the fragility of the moment.  That’s the philosophy of performance for me.  Generic Levitra vardenafil sale from https://www.caladrius.com/levitra/ and read about Levitra warnings. What makes the performance special is the audience coming into the space for that particular hour.  That approach is one of the reasons I wanted to work with Ben, and one of the things that’s been easy in our process.

Q:  Are there other surprises in the process?

Ben:  We’ve discovered Jil’s “inner circus apparatus” is the tight-wire. She has the ability to uber-focus and get shit done.  I’m a juggler at heart.  Jugglers are a bit dreamy and spacy.

Q:  What are the themes and metaphors you’ve been working with?

Jil:  …not exactly feral, but like we are playing with the idea that human beings have become removed from their species.  Sleep, fresh air, movement and things like that equate with the animal and species nature of who we are.  By living in boxes and travelling on concrete roads, a lot is lost.  This piece is finding these [lost] things in the modern world that we live in.  Our themes started with metaphors of travelling, searching, traversing mountains.  There’s a constant yearning to be somewhere else.  The tight-wire is a yearning.  The trapeze moves through the space.  Dance moves through space.

Ben:  The German Wheel is a metaphor – it’s a dream-catcher, hoisted into the sky, an offering up to the gods.  It crashes down, funnels energy, catches me like a net.  If I do one thing, it will affect someone else; it tilts the balance.  I don’t have a relationship with Jil, but I have an effect on Jil – an effect that lives in physics.  Through that physical effect, Jil has an emotional reaction to the movement.

Q:  The work I saw in rehearsal was episodic in nature.  What kind of process are you using to shape the “whole?”

Jil:  Ben brought techniques from experimental theater.  Ben would talk us through an exercise. We found nuggets that were interesting to us that seemed to have a space in the larger work.  We looked at the chunks and started to form an arc.  I tend to like things that evolve throughout an evening.  The piece starts very high up in the sky, but mostly it’s a downward progression.  The space gets more condensed over time; we move closer together.  These are deliberate choices.  Humans are not meant to be lone wolfs.  We are meant to be in community.  We become more and more entangled as a group as the piece moves through the evening.  There is a sense of progression and change.  We are working with time and the pace of the show.  Music is going to be important to finding the arc.

Ben:  We are dealing with loops.  We’ve just let it bleed together.  We’ve let the parts that need to speak, speak.  The parts that didn’t speak we’ve let disappear.  This is the marination part. Whenever you leave something alone, it’s easier to throw it away.  We don’t have a director, so it’s made the piece very much Jil’s and mine and given us control.  At the same time, we have to be very careful that this whole piece has what I call “permeation” – that our themes and metaphors are penetrating all parts of the work.  A lot of times I work backwards to go forwards.  We know the ending.  How can we create an arc to get to that ending?  [That arc will allow] people to come with us through the whole journey and want to live in the piece the entire time.

Jil:  We will continue to perform WaywardLand and let the work evolve in new spaces. We will also look for opportunities to build new work under the platform Albatross Movement. Now that I have had a taste of what can happen with circus apparatus when it is used to create meaning rather than spectacle, I will definitely continue my training in the German Wheel.

Ben:  Ditto!  There is lots of possibility for this piece and further collaboration.  The CSA has been incredibly supportive and excited for opening night and what awaits.