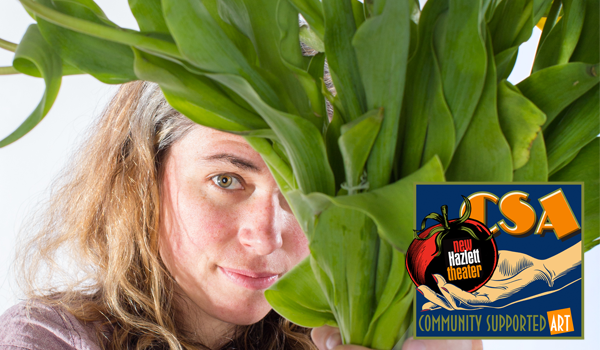 To lay the groundwork for how a piece fits into an institution’s programming, we need to look at the institution’s current programming. Since the New Hazlett’s Community Supported Arts (CSA) program began prior to Jennifer Myers’ consolidation of public performance actions into the staged Translations, I think this is a reasonable first approach.

The New Hazlett programs a mix of traditional and experimental arts. In addition, there are traditional experimental arts, where the experiment has been codified into a new tradition – think various strains of free jazz, improvised and contemporary dance, minimalism. One assumption made of the CSA’s mission is to believe that the series provides a platform that does not exist in Pittsburgh’s current outlets for performance. Theater of small, medium, and large sizes exists. Dance has emerged a visible cultural force in the past five years. Music is widespread with composer-run collectives creating performance opportunities, a steady stream of DIY venues providing safe places for experimentation, and traditional venues offering varying levels of corporate-minded rock programming. (Another more practical interpretation would be that the programming is balanced enough to bring new audiences to performances that do have other outlets in the city, but I like this first thought better.) If the former is true, the CSA is a platform for collaboration and experimentation in form, in content, in genre, in the question of what is entertainment and what is art, in inspiring thought. With this definition, Myers’ piece succeeds in presenting a work that cannot neatly be defined as theater, dance, analysis, protest, music, or action art. The work shifts between performance methods while retaining elements of movement – bodies, light, smoke, sound. The work speaks to a disgusting history of ecological and human abuses. The work creates beautiful images and suggests solutions through empowerment, protest, and creativity. 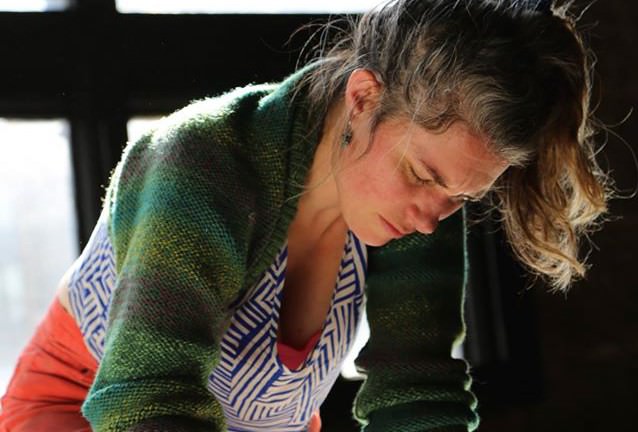 Throughout the past two years, Myers conducted a series of public performances titled “Pittsburgh Performance Actions” with a purpose of activating sites with creativity. The piece was split into six acts with brief interludes supplied by Scott Andrew reading cards, Jennifer Myers releasing rings of smoke from a manually-triggered smoke machine, and Ricardo Iamuuri Robinson creating soundscapes. With a relatively static Andrews and Robinson, Myers’ smoke rings provided a subtle movement that nicely balanced the sometimes more energetic acts. Honestly, it was captivating watching the smoke flow through the space. After an appealingly vivid sound intro by Robinson, a flash of light revealed a pseudo-mystical Scott Andrew. As an opening, it was effective. A sense of surprise was instilled, which carried over nicely to a more patient Act 1 | Song for Pittsburgh. In this act, a Tessa Barber sings “Song for Pittsburgh” while holding a bouquet of flowers in front of her face. The song comments directly on fracking, theft of land – possibly Native American land, crimes of GMO-mongers, or federal and corporate destruction of sustainable farming that introduces a near resistance-free path for fracker land acquisition. Take your pick(s). The message is a plea for a community effort while acknowledging that solutions cannot be perfect. Possibly, nature is pleading for assistance or some give to our take.

The stillness of act one turns over to a fierce dance sequence by Gia Cacalano, one of most disciplined dancers in Pittsburgh. The dance emerges from Oreen Cohen’s provocative recitation of “women words” – “a woman is a vixen, a woman is a tit. Women as edible. Women are cheesecake, they are cherries, they are crumpets. A woman is a dish.”

Linear plots are sometimes more forgiving when it comes to structure. In non-linear works, structural decisions tend to have a larger impact on how messages are delivered. With an early announcement that the work will be performed in six acts, the audience now has an expectation for the timing of events and inevitably starts a countdown until the end of the piece. The power of each act engages the audiences through this format, but there are some instances where I wish I would have known less about the pacing of the piece. The interludes between acts consisted of enough of the same elements each time so that after a few iterations, they functioned as placeholders instead of furthering engagement. I’m wondering what thoughts would be triggered if an element was missing or subversively altered. 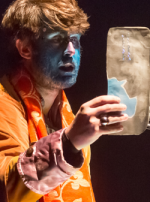 Since performers were only present for their act, there is a slight vaudeville aspect to the piece. Depending on one’s knowledge of Pittsburgh’s current arts landscape, the piece could seem like a Pittsburgh’s Greatest Hits collection. Andrew’s Unreliable Narrator character has some ties to his work as co-founder of the Institute for New Feeling. Cacalano’s work in Act Two is distinctly Gia. The movement language would fit in with her recent ensemble and solo work. In Act Three | The Baiji’s Last Swim, inventive dancers Jil Stifel and Jasmine Hearn are backed by Mimi Jong’s gorgeous erhu playing. Act Four saw vocal powerhouse Anqwenique Wingfield’s restaging of Myers’ courthouse rendition of “This Land is Our Land,” preceded by a fictional protest monologue by the rather young and rather accomplished Kylan Bower Bjornson. From Act One through Act Five, the pacing worked since the performances within each act were varied and an element of humor was slowly added with the shock value of Bjornson’s wise-beyond-years speech and the whisper to scream “I love you’s” of Act Five. By Act Six, the format tested its breaking point. By this point, a series of overarching pieces performed in the background of the interludes and acts had all but ended. Act Six returned to the solitude of a solo piece of music. The next sentence is a subjective opinion. The descending bass line of Biber’s Passacaglia for viola solo really challenges my generally patient being. Despite Ji Young Nam’s nice performance, the use of this piece did not provide a satisfying resolution. Intellectually, I know this is a nice choice. Biber’s Passacaglia closed his Rosary Sonatas and is a suitable mix of melancholy and hope. That said, I’d like to think that this piece should not have a resolution. I’m left feeling unfinished and wanting more, and I like that for this piece.

Myers is successful at viewing injustice and countering it with vivid images that are potent yet under the threshold of intimidating or restrictive. Where Myers’ Allegheny County Courthouse “This Land is Our Land” was raw in an attempt to break through to politicians, Wingfield’s rendition is undeniable. You cannot not listen to it. You have to appreciate it and take in its message. Experience is subjective, but Translations did revive mental images. Barber’s plant-covered folk song recalled British folk which led to images of driving through the countryside (sorry about the gasoline) to the Back to the Land movement to the Whole Earth Catalog to Alice Waters to Bill McKibben. “The Baiji’s Last Swim” triggered the conflict of China’s fair-ups industrialism vs. a creative non-fiction global effort to reduce emissions. Pair that title with Jong’s traditional Chinese song and Hearn/Stifel’s awkward movements and there are a few mental complexities to work out when you head home after the show. 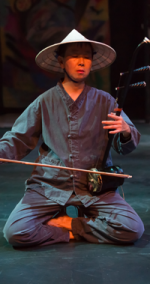 If the purpose of the public performance actions was to instill a neutral sidewalk or river or courthouse with temporary creativity, the staged version had to sell creativity to an already activated space. By showcasing a number of talents, the performance added a new element: gratitude. Gratitude for a city busy with creative work. Gratitude to the sharing of expression, movement, sweat, voice. The idea of gratitude is one of the first steps towards understanding the need for the natural world. Gratitude for the earth’s restorative properties and the ability to produce crops, herbs, roots, and plants. Gratitude leads to acceptance and understanding, which leads to knowledge of how decisions, legislative and personal, impact an environment and its people.