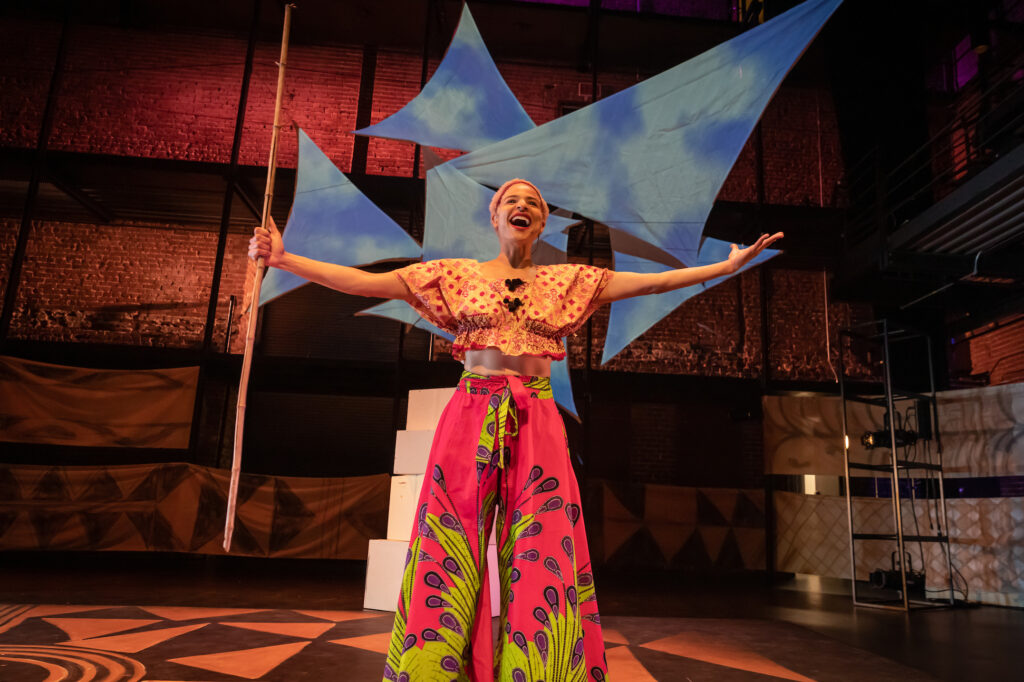 Continuing Recital’s sponsored partnership with the New Hazlett Theater, we are presenting a series of editorially-independent previews and reviews of the 2021 Community Supported Art (CSA) Performance Series. Below is our review of Sunsum is Spirit by Samuel Boateng, a collaborative response from Recital editor David Bernabo and guest panelists Jason Baldinger and Vanessa Reseland. Read their bios at the end of the review.

What Lies at the Edge of Beauty?

‘Sunsum is Spirit’ is a potent, kaleidoscopic ride through sound, movement, and image

With Sunsum is Spirit, Samuel Boateng crafts a kaleidoscopic interdisciplinary work that is in constant movement. The eye follows colorful visual patterns from the painted floor to the beautifully-patterned costumes to the tightly-mapped projections. Dancers draw journeys on the stage, constantly unfolding different configurations while working within traditional and contemporary movement languages, responding to the warm sounds of the band, itself deeply entrenched in polyrhythmic play. The plot, complete with a few twists, is the connective tissue for these set pieces. Balancing abstraction and concreteness, an argument for a more equitable world (or at least, village) unfolds. It’s an idea that is mirrored in the execution of the performance. With so many elements, there is risk of competition, that certain actions would be wasted or overshadowed by other concurrent elements, but Boateng and his team ensure that there is no hierarchy between music, movement, story, and visuals. All these elements work in harmony.

Director Kelsey Robinson, also playing the role of our guide Nnframa — the wind of chaos — twirls out from the wings to introduce the performance. We are entering the story on a day of celebration, a celebration of past events and a celebration of three of the village’s forbearers. Robinson’s presence is immediately inviting, warm, and reassuring despite the placement of this story in 1700s West Africa as the slave trade is expanding.

We travel back a few centuries and in quick fashion are introduced to most of the characters. Nana Kwame Otimi (Wali Jamal) is the king of this village, a once-thriving place that has recently seen problems — losses of land, lower crop yields, and disappearances. Rumors pointing to the king’s involvement in these issues are growing. He tasks Kwabena Énti-Nna (Richard McBride), Afia Anotew (Melessie Clark), and Kwadwo Adoé (Ira Cambric) with tracking down a healer who can resolve the problems in the village. The travelers venture into the wilderness, continually get lost, navigate positive and negative signs and symbols emerging from the natural world, and hesitantly begin to question the nature of their task.

After coming upon an abandoned village, the travelers meet a child (or is it an ancestor?) who shows them that their task is a ruse created by their corrupted king to sell them into slavery. They devise a scheme to ensnare a spy that has been following them. With the spy in hand, the travelers return to their village to provide proof of the king’s deceit. At the end of the piece, the king is dethroned and the three travelers are made co-leaders. A celebration erupts.

In addition to Robinson’s occasional exposition, music guides us through this journey. There’s rolling hand-percussion, sweet bass runs, and deep piano chords. There’s uplifting highlife guitar lines and horn jabs with rhythms that you need to catch in your body. Developments in jazz in the late 60s — the loosening of forms, the integration with gospel, soul, and funk, the heavy spiritualism — are very present in much of the score. Fans of Idris Muhammad, Roy Ayers, Kelan Phil Cochran and the Artistic Heritage Ensemble, or Mwandishi will certainly feel at home with this performance.
Music introduces each scene. It accompanies the preparations for the journey as the travelers sing out their strengths and qualifications. “If you want fresh meat, I will give you three. I’ll be real, real strong. I don’t fear no one.” Music accompanies dream and nightmare sequences — sometimes giving the band a place to stretch out with solos, other times opting for something more abstract.