REVIEW: The Revolution of Evelyn Serrano 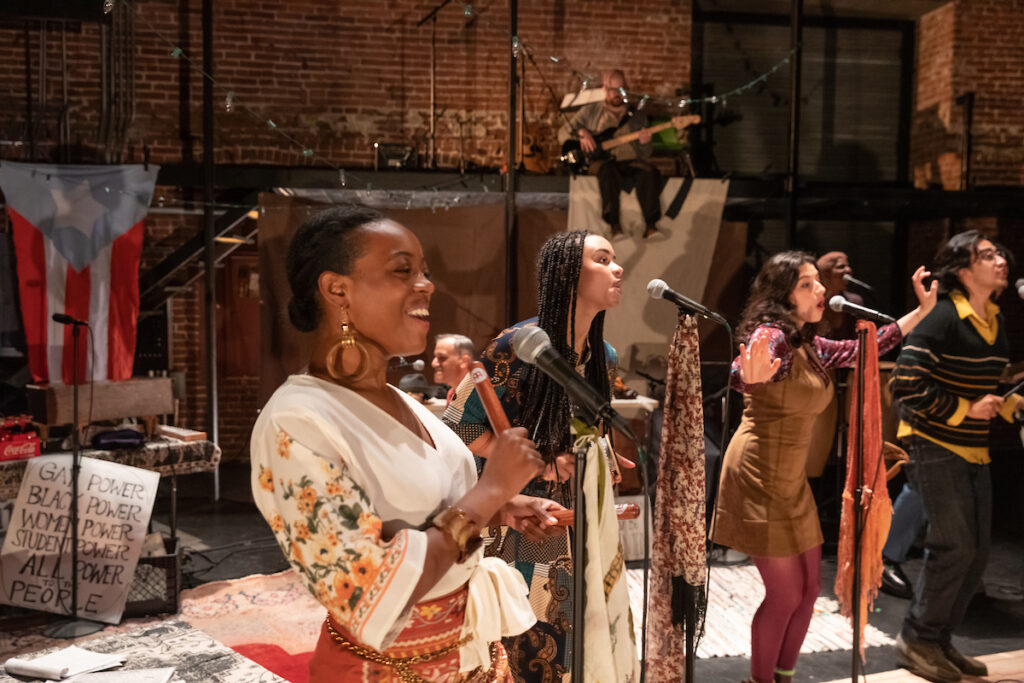 Continuing Recital’s sponsored partnership with the New Hazlett Theater, we are presenting a series of editorially-independent previews and reviews of the 2021 Community Supported Art (CSA) Performance Series. Below is our review of The Revolution of Evelyn Serrano by Tlaloc Rivas, a collaborative response from Recital editor David Bernabo and guest panelists Jason Baldinger, Ariel Xiu, and Vanessa Reseland. Read their bios at the end of the review.

Review: Energizing, vibrant, and potent, ‘The Revolution of Evelyn Serrano’ closes out the CSA season on a high note

Energizing, vibrant, and potent, The Revolution of Evelyn Serrano closes out the eighth season of the New Hazlett Theater’s CSA performance series in grand fashion. Presented as a workshop performance and based on Sonia Manzano’s book of the same name, Tlaloc Rivas’s play presents a fictionalized look at the emergence of the Young Lords in East Harlem in 1969 as told through the eyes of 14-year old Evelyn. The cast is impressive, taking on multiple roles, frequently picking up instruments and breaking into song as they chart the radicalization of Evelyn and her friends during a dynamic period of change in American history. Despite it’s “workshop” status, the performance is slick, the songs feel alive, and the calls for revolution, improving one’s community, and tearing down oppressive systems are still vital.

The year is 1979. The stage depicts a radio station where a group re-enacts two sets of events: the Young Lords’ East Harlem Garbage Offensive in the summer of 1969 and the 11-day occupation of the First Spanish Methodist Church and it’s reinvention as the People’s Church. The Young Lords emerged in the late 60s in Chicago and quickly formed chapters in New York and places along the east and west coasts. Modeled after the Black Panthers, the Young Lords were a civil and human rights organization that advocated for Puerto Rican independence and self-determination as well as neighborhood empowerment. To that end, the group set up free breakfast programs and education opportunities. Evelyn’s (Carolina Campos) story and her evolving relationships with her friends, her strict but caring mother (Jade Langan), and her recently arrived and fiercely radical grandmother (Kelsey Robinson) thread these historical events together with an engaging and intimate personal narrative.

East Harlem in the hot summer of 1969 smells like basuda or trash according to Evelyn. Her mother justifies their living there by mentioning two entities that she blames for ruining the potential of Puerto Rico — crooked politicians and selfish radicals. People know Evelyn as Maria or Rosa, but with budding personal agency, she decides to call herself Evelyn, her second middle name. Evelyn begins a part-time job at the five and dime where she meets Abuela, her grandmother, a soon-to-be catalyst in Evelyn’s evolving political interests. Before knowing about, let alone joining the Young Lords, Evelyn veers between advocating for personal responsibility and leaping into the unknown. Early in the play, Evelyn channels her mother when berating a friend for his lack of responsibility to work and family — “do you want to be like the glue sniffers and bums?” But after learning about the Young Lords’ mission, Evelyn feels like she is “wearing a new pair of glasses.”