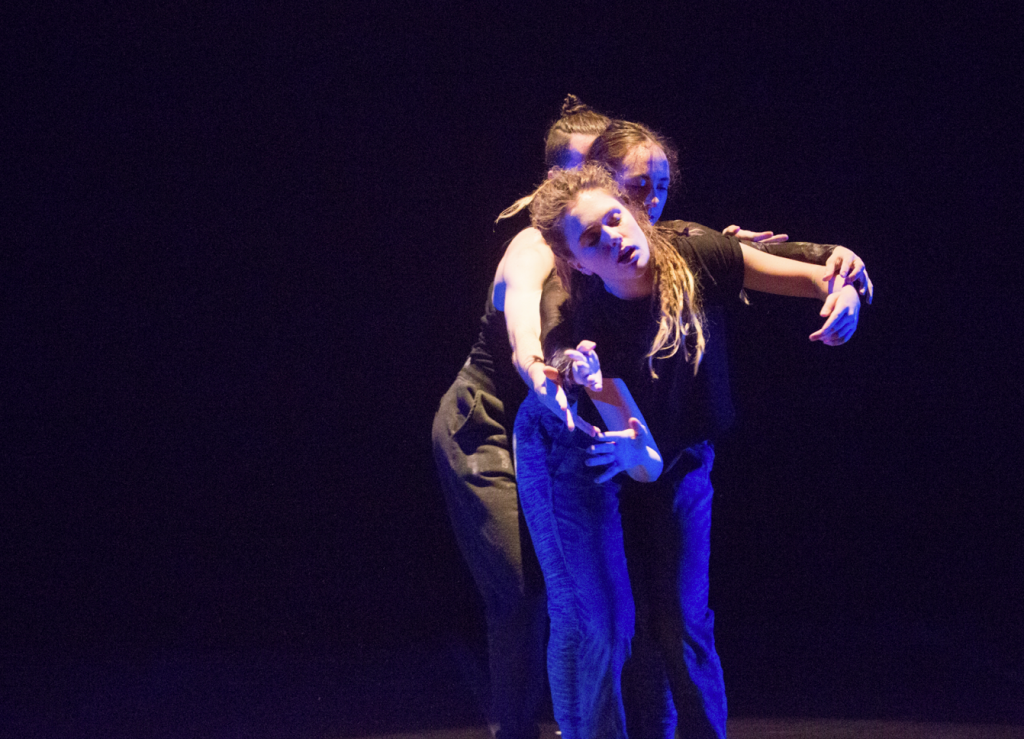 In choreographer Roberta Guido’s debut exposition we can witness that the artist who has been created by the piece is clearly different from the person who began the creation.  Her dance was foremost a non-fictional exploration of touch and its associated memory, showcasing a narrative of  vignettes on the theme of what it means to be alone, both in medley with others, and in solo.  In effect, the audience is brought with the artists through their self-reflective process to the same destination of a shared present.

Entitled RETREAD/together/apart, Roberta’s work is an exhibition in repetitions that linger as influences upon those alone within moments of questioned purpose.  It is expressly the ‘revisiting’, in echoes of self-similar gesture, that illustrates the dancers’ internal evolutions, along with the latent effect of other’s touch in our own continuation.

We witness the lingering touch, the touch withdrawn, and the absence of touch, offered through the cumulative evidence in the residue of chalk on bodies and backgrounds, traces that may be revisited, remembered, and re-encountered.  The introspection of the dance dwells on the question of why we find ourselves retreading the same paths, experiences, and relations.  What is it we are seeking that keeps us returning to the comfort of the habitual, the familiar, the safe?

The abstraction of this loneliness is clearly and simply manifest in moments of contrast, moments of absence highlighted against shared experiences immediately past.  The clear choruses of recognizable phrases exploited the effective and elegant understatement hallmark of skilled dancers, leaving room for them to return again and again to punctuating moments of stillness and silence, apportioning the opportunity to be changed by experience.  The choreography remained flexible enough in tempo to leave room for both the dancers’ open premise to occur, and time for the audience’s consideration, coupled with music aptly chosen to commend unity between vignettes, as well as protracted silences where the dancers were left unsurrounded by any sound.

Variable use of available depth and height to showcase distance and proximity turned the entirety of the stage to advantage as negative space surrounding the dancers, with that space made meaningful as a stain where bodies and light had just been.  A present character alongside the three dancers in their darkness was an eggshell basin of chalk acting as an oasis for the persistence of memory and reservoir for the indelibility of touch.  The prop of chalk was employed to mark courses traveled and others encountered, the one effect that could have been accentuated even more and benefited from a greater visual contrast to the skin and surroundings.

The most prominent dynamic overall was the dancers’ simplicity and humble relation to the idea.  The delicate nuance of direction closely juxtaposed unison with independence, evidencing a maturity and unboundedness in the thematic movements that denoted channels cut in experience by repetition.  Essences of improvisation meshed well with the choreography, such that the relationship between director and dancers confessed the common language requisite for the comfort that denotes cohesive ensemble and that permits the witness of an idea, rather than the projection of idea upon the viewer.

With delicacy of sentiment and fluidity of structure, the direction felt spontaneous and natural. Though Roberta’s first solo, choreographic experience, we can hope we’ll find these premises similarly echoed, and further evolved in future works.