REVIEW: Quest and the Girl with the Yellow Jacket 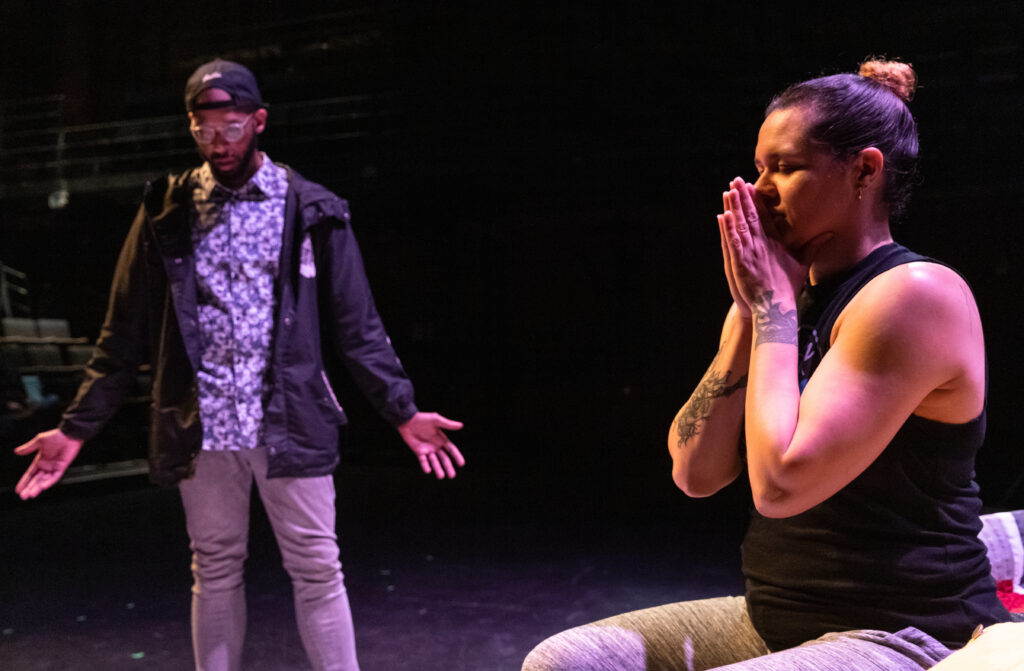 Continuing Recital’s sponsored partnership with the New Hazlett Theater, we are presenting a series of editorially-independent previews and reviews of the 2021 Community Supported Art (CSA) Performance Series. Below is our review of Quest and the Girl with the Yellow Jacket by Dr. HollyHood and Jon Quest, a collaborative response from Recital editor David Bernabo and guest panelists Jason Baldinger, Ariel Xiu, and Vanessa Reseland. Read their bios at the end of the review.

Review: A Love Triangle Dissolves in ‘Quest and the Girl with the Yellow Jacket’

In Quest and the Girl with the Yellow Jacket, hip hop artists Dr. HollyHood and Jon Quest boldly stitch together each of their latest solo albums to present a consolidated tale of deceit, ruined love, and near redemption. Billed as a “hip hopera,” the song-based sections soar, pairing elegant rhymes and strong flow with interesting production that spans classic and contemporary eras. Given the requirement of a virtual performance, there’s also a willingness to experiment by including filmed music videos and split screen segments. Despite the ambitions, the performance tends to lag at points due to unpolished, somewhat indifferent acting and a script that doesn’t allow the characters to transform within the duration of the performance. For a work about people managing different types of love, there is little chemistry between the performers, which is made clearer when the performers truly groove in their respective solo settings.

Before the pandemic, in 2019, Dr. HollyHood aka Dr. Amber Epps and Jon Quest aka Jonathan Brown each released solo albums. Dr. Hollyhood’s Yellow Jacket charts the timeline of a woman’s relationship with a married man while Jon Quest’s Hollywood Divorce tells a similar story, but from a male point of view as the narrator fuels the disintegration of both a marriage and an extramarital relationship. For Quest and the Girl with the Yellow Jacket, Epps and Brown merge the two records into one linear narrative, placing Amber and Jon in a budding relationship while Jon’s wife, Tori, grows more suspicious and reasonably enraged as the performance builds to a violent climax.

Whether on screen, stage, or page, the love triangle is a well-known storytelling device. The Bible has a unique love triangle with Jacob being tricked into marrying Leah, despite his love for her sister, Rachel; Shakespeare’s Twelfth Night mixes things up with disguised identities; Harold Pintor based the play Betrayal on his affair with reporter Joan Bakewell, much to her chagrin; and Spike Lee’s She’s Gotta Have It ups the ante with it’s love quadrangle. Since the public generally understands the love triangle concept and can anticipate possible outcomes, the impact of this type of story really comes down to the execution of the work.

The best things about Quest and the Girl with the Yellow Jacket are the song sequences. Amber and Jon, as characters, come to life when rapping (mostly pre-recorded tracks, though the spoken word sections are also really effective.) There’s swagger, elegant flows full of barbed phrases, and an ease of delivery. You get to know these characters through their rhymes. You hear their passion, their confusion, their disgust, and their desires.