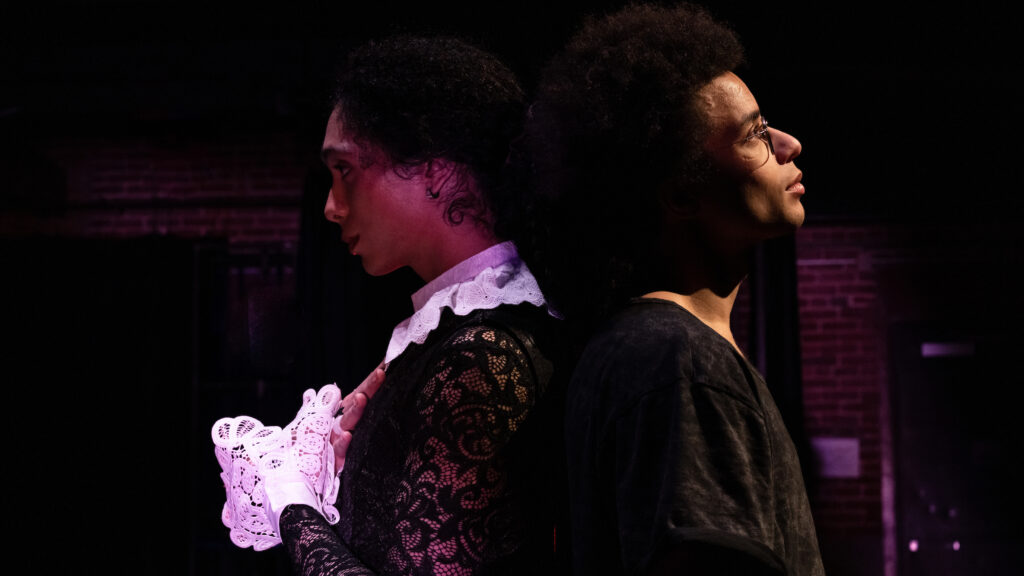 Continuing Recital’s sponsored partnership with the New Hazlett Theater, we are presenting a series of editorially-independent previews and reviews of the 2022–23 Community Supported Art (CSA) Performance Series. Below is our review of Perdita by Nathan Wagner, a collaborative response from Vanessa Reseland and David Bernabo with guest panelists Eric Graf, Ariel Xiu, and Luis Zul. Read their bios at the end of the review.

The description for Nathan Wagner’s Perdita reads a bit flat on paper. A high school student is bored in class. He’s incredibly bright and can breeze through the curriculum, but he’s having trouble navigating the social experience. Also, a ghostly bard–Shakespeare–is following him around, distractingly quoting passages from his own books. Fine. But there’s a twist. What reads as a somewhat pedestrian high school tragicomedy turns out to be an immensely powerful story about compounding traumas and the search for hope in the form of self-realization and the cultivation of community. This difficult thematic terrain is expertly executed by an impressive cast. They seamlessly bring to life a complicated 100-page script (with only six days of rehearsals) that is crammed with anxieties, micro- and macro-aggressions, humor, and an endless string of Shakespearean zingers. Floating between outsized caricatures and detailed, complicated emotions, Perdita is a surprisingly stinging critique of systemic bigotry as well as a how-to guide for moving forward in the wake of loss.

In the first act, the audience is, to some extent, in the dark. Ethan Cole, played by the charming and adept Ethan Davis Butler, is a self-proclaimed comedian, cracking legitimately funny jokes that also act as a cover for some form of past trauma. He cracks jokes in class, in the hallway, and in the principal’s office. He’s often too smart for his own good, answering every teacher’s request with a clever, word-heavy campaign of resistance. A cycle forms. Each scene starts innocently but ends in a fever pitch. A teacher is questioning the class or pairing students up for partnered assignments. Five minutes later, Ethan has detention or is nearing expulsion. The cycle repeats throughout the first act, often leaving Ethan in a shell of frustration and isolation.

Surrounding Ethan is a cast of friends and foes whose punchy dialogue keeps the pace of Perdita lively. There are caricatures of the high school microcosm–“the nerd, the bully, the weirdo” — and while the play’s focus remains on Ethan, occasionally, the caricatures are given an opportunity to dig into their own histories. For example, we hear allusions to the “not straight” sexual orientation of Barbara, hilariously played by Danielle Powell. Elsewhere, there’s a cafeteria scene where Ethan reveals his personal losses to his love interest that is reminiscent of a scene in The Breakfast Club where the detainees divulge their hidden pains. But the romantic interest, Sarah, played with skillful awkwardness by Anya Epstein, doesn’t get a chance to express much of her personal history. She often exists solely as a safe place for Ethan to open up and allow his story to be told. Perhaps diving deeper into the family lives of these characters, as the play does with the bigoted rival Kennedy, played with a pitch-perfect sense of entitlement by Mason Down, could flesh out the world as Ethan attempts to find his community within it.

High school, the concept and the place, is another character. The high school in Perdita is a curious conflation of current day politics and nods to 1990s pop culture high school-based dramedies. There are scene change music cues styled like those from Saved By the Bell and My So-Called Life. Anthems like Wheatus’s “Teenage Dirtbag” send us back twenty years, for better or worse. There’s a literal shout out to Baz Luhrmann’s film Romeo + Juliet, and of course, who could forget the Shakespearean plot of 10 Things I Hate About You. Given these reference points, it’s lucky that the teen angst in Perdita is dialed down, opting for drama instead of melodrama.

Regarding the physical representation of high school, set designer Samantha Olszewski used only the required elements–a whiteboard, half a dozen desks, and two painted lockers. Though somewhat bare and lackluster, the set clearly resembled a high school and the modular mobility of the set kept between scenes fluid and quick.

If you are the type of viewer that is concerned about the realism of Perdita’s high school, our review panel has you covered. One panel member is a current high school principal, and they found the play’s depiction of school life to be a bit hit or miss. The “three strikes and you’re out rule” was flimsy, placing us directly in Saved By the Bell territory. But Ethan’s expulsion did cause audience confusion over the play’s timeline–are we watching one day? A week? A semester? How quickly are these characters developing?

But what rings true is the trauma affecting students who largely lack the maturity to fully identify and express the emotional pains percolating within them. Perdita shows how the adults–the principal and a few of the teachers–can exacerbate a student’s pain or discomfort. The mismatch of generations, ideas, and world views within the student body, faculty, and staff was, at times, painfully realistic.

In Act I, tension is built over a series of short vignettes–classroom arguments and hallway conversations. Act II opens up, spending more time with each scene, building towards uncovering the source of Ethan’s trauma–the suicide of his sister, a transgender girl.

In Act I, Ethan is persistently “nagged” by a mirage of Shakespeare. A gender-defying grace flows through The Bard, portrayed by the soft-spoken June Almonte. As the Bard is seen only by Ethan, it is as if this The Bard knows Ethan intimately, but it is unclear how. The realization in Act II that the bard is Ethan’s sister is immensely powerful, retroactively making the lackluster marketing strategies and the tense string of self-defeating decisions from Ethan all worth it. With such a reliance on the trope of a coming-of-age, high school story, it’s the last quarter of the play that sets it apart and makes the story new for the audience.

There is a stunning moment when the Bard took down her hair and sat with Ethan over a large book as Ethan told a story of sitting with his beloved sister, a trans girl named Perdita. Suddenly, The Bard softened and became less of an ethereal creation and more of a gentle human, a living memory, a recovered child beside a grieving child, connecting over a moving piece of text. Director Tru Verrit-Fleming deserves a standing ovation and a hug for the execution of this poignant moment.

With all the implications and possible inferences that unfold in the second act, we don’t have long with Perdita after her true self is actualized. The bit of hope she expresses in her own voice, Shakespeare’s text no longer needed, created an audibly emotional reaction within the audience. Soft gasps echoed as she transmogrified from a ghostly guide in Ethan’s ear to a full-fledged human being and embodiment of Ethan’s love and loss. In the final moments, aided by a glorious red glow from stage left, Perdita effectively released herself from the imprisonment of society’s ignorance and experienced a moment of true autonomy before disappearing from Ethan’s view. Tears and sniffles filled the theater. It was a glorious moment in a tragic story that one could only sit in the theater and ask, “What beauty could exist if we simply let people be who they are?”

The memorial to Perdita, made by Ethan’s new friends at the end of the play, ensured that she would not only be remembered, but it seemed to remind us that she was still there. Our modern American culture has such an unequivocal view of death. People are alive and here or dead and gone. Within our panel, we discussed the Mexican view of death, the substantiation of the spirits that linger postmortem. Saying goodbye is not a necessary step in healing. The idea that Evan is “being haunted” by his sister is one way to look at this story. Another is to see the bond and love between them as everlasting. Perdita exists in the way Ethan remembers her. She is a part of his vivid memories, the literature he reads, the way he speaks of her and stands up for her, in the commitment he and his friends make toward fair treatment for the LGBTQIA community in their school, in his belief in himself, and in the questioning of an authority that can so easily drown out the cries of those who challenge it.

Perdita is a great starting point for people to get acquainted with Shakespeare. This show is an opportunity for those who haven’t experienced the universality of Shakespearean language to apply his poetry to modern and relevant issues. In fact, the scene that enthralled all of us occurred as the students read excerpts from Shakespeare’s various plays and acted them out in class. The teacher noted that Shakespeare was not merely written to be read, it was written to be lived out by actors giving the words breath, and we felt that statement to be true in this scene. There was the story of the play being lived as well as the story within the story. Even the bigoted foil lost himself in the passion of the drama, and they all let their animosities fade. This is the magic of theatre, the healing way storytelling brings people together, and Nathan Wagner’s ode to the theatre was not lost on his audience.