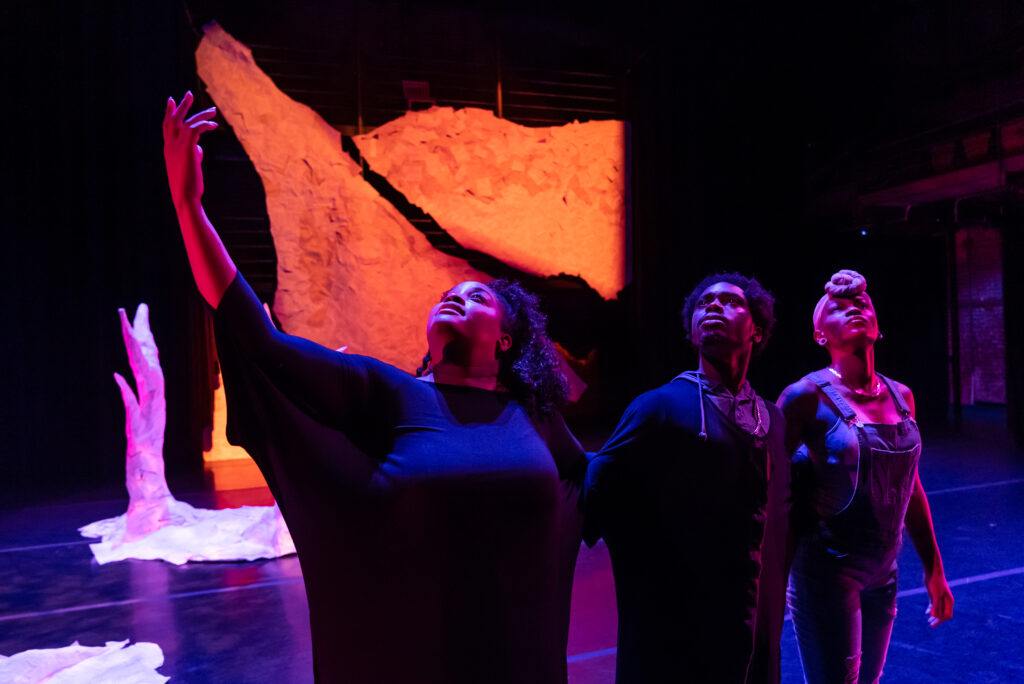 Continuing Recital’s sponsored partnership with the New Hazlett Theater, we are presenting a series of editorially-independent previews and reviews of the 2021–22 Community Supported Art (CSA) Performance Series. Below is our review of Lavender Terrace by NaTasha Thompson, a collaborative response from Recital editor David Bernabo and guest panelists Jason Baldinger and Kelsey Robinson. Read their bios at the end of the review.

In Lavender Terrace, playwright and director NaTasha Thompson updates Marita Bonner’s 1928 play, The Purple Flower, overlaying its message of identifying and overcoming oppression onto a series of specific and generalized events from the last century. With references to the Tulsa Race Massacre and the protests of the summer of 2020, Thompson walks the audience through 100 years of evolving oppression, culminating in a bracing story about gentrification and displacement. But this journey is not heavy-handed, and it is certainly not without beauty. Video, dance, and music are the main modes of storytelling, and they gracefully propel a narrative that is quite open-ended despite the origin point of the The Purple Flower. Abstraction and specificity play off each other until the third act when a tonal shift disrupts the flow of events and the audience is dropped into a poignant conversation about community and displacement. It’s fair to argue that one’s prior knowledge of the plot details of The Purple Flower alters the way Lavender Terrace is understood, but the overall effect is a hazy narrative that becomes clearer as the piece introduces and builds upon its storytelling tools.

Marita Bonner’s play The Purple Flower was first published in 1928 in The Crisis, a magazine founded by the NAACP with W. E. B. Du Bois acting as the magazine’s first editor. The play presents an allegory of racial discrimination in the United States, contrasting two populations–the Us’s and the White Devils, a controlling upper class, flush with wealth drawn from their oppression of the Us’s. The Us’s, writers Bonner, “can be as white as the White Devils, as brown as the earth, as black as the center of a poppy. They may look as if they were something or nothing.”

I’d wager that the audience that watched Lavender Terrace saw one of two plays, depending on their familiarity of Bonner’s The Purple Flower. Prior knowledge of the play’s plot is helpful in identifying parallels between the works. For example, the beautifully rendered, papery backdrop that is divided into three rough-edged sections pulls double duty by symbolizing the hill while also acting as a fragmented projection screen. In Act I, which is a one scene video piece titled “Framing the Genesis,” the spoken line, “resting with their bodies towards Nowhere,” is audible. This line provides a clue that the soft focused figures on screen are part of the Us’s. Their backs are facing Nowhere, their heads and arms and hands are reaching toward the hill, toward Somewhere, toward a place of prosperity and, once there, equality. On its own, it’s a beautifully impressionistic film, a pleasure to watch alongside the organic sounds of piano and upright bass clipping and looping. But watching within the context of The Purple Flower adds weight to the sequence.