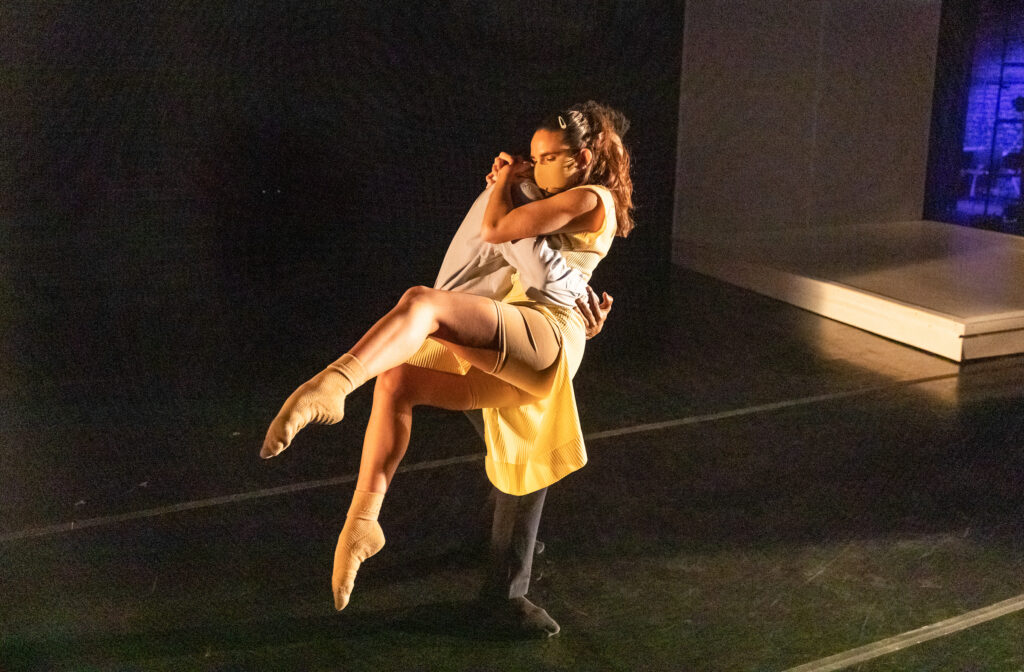 Continuing Recital’s sponsored partnership with the New Hazlett Theater, we are presenting a series of editorially-independent previews and reviews of the 2021 Community Supported Art (CSA) Performance Series. Below is our review of Milton by Kaylin Horgan, a collaborative response from Recital editor David Bernabo and guest panelists Jason Baldinger and Gigi Gatewood. Read their bios at the end of the review, and read our preview of the performance here.

The task of encapsulating someone’s life is a daunting one, especially when you have about an hour to present it. Which moments from their life do you deem critical? How do you tie the story together without lengthy passages of exposition? With Milton, choreographer and dancer Kaylin Horgan effectively dives into lawyer and now minister Milton Raiford’s childhood, adolescence, and adulthood in a layered production that veers between dance and musical theater, directness and abstraction, and desire and reality.

The timeline of the show veers from in-focus vignettes (where a young Milton wins a spelling bee, a teenage Milton navigates an interracial relationship, and an adult Milton takes on a court case) to more abstract, impressionistic events that move the story forward while leaving a feeling or vibe that doesn’t quite exist in the more literal scenes. This vibe, created by different layers of sound, image, and movement, is quite intoxicating. It is mysterious and invites the audience to fill in some of the blanks.

After a young Milton (wonderfully performed by Daijaun Marshman) spells “antidisestablishmentarianism” and “obese” to win the spelling bee, the production shifts into layers that cut across time and place. Young Milton is in celebration mode while his mother Cora (Selena Williams) is located in a different part of the stage singing, “give him a better chance to be the man I know he can be.” She laments the conditions of her life and hopes that Milton can find a better path. Jump cut to Milton falling through time. Now he is a teenager trying to avoid being trampled on after being swept up into a crowd of video-projected inverted outlines of people.

These early scenes are important, because they inform the audience of the language of the performance. This story is told in layers — multiple voices and visual presentations are able to collapse time. In a given sequence, movement and onstage conversations convey the inner thoughts of characters, a song from Cora reveals both her thoughts and the generalized thoughts of the previous generation, and a projected news clipping positions the stage action within a larger societal context.

There’s an additional layer in Treble NLS and Brittney Chantele’s soundscore. While the music maintains a laid-back, chilled-out vibe, the lyrics and vocal delivery provide insight into the characters mindsets. It’s not always a 1:1 relationship between lyric and character — sometimes the lyrics work more generally, addressing multiple characters, like when Chantele is repeating, “please don’t go, I’ve been tired of being alone” while teenage Milton (LaTrea Derome) and his girlfriend Randy (Cecilia Benitez) grow apart.

This layering is not always smooth. There are the occasional clunky bits of exposition, and the relationship between teenage Milton and Randy may take up an outsized portion of the performance even though the sequence has many enjoyable moments.

Milton and Randy’s courtship is relatively quick and while the decay of their union is quite long, there are interesting nodes interspersed throughout their break-up. There’s the juxtaposition of Randy pleading, “ways of our parents, can we please not mind it?” with Cora’s “you have a lot of people counting on your success. You don’t have time for hanging out with that white girl.” There’s Milton and Randy’s clash over their individual responses to the 1968 riots that evolved in response to the assassination of Dr. Martin Luther King, Jr. Randy wants to jump to the front lines, while Milton wants to focus on himself to find a way into the system in order to change it. The movement of their break-up includes a confrontational section filled with bold, full-bodied gestures as if Milton and Randy are throwing movement at one another as well as a quieter section of complex weight-sharing and lifts.

The interdisciplinary approach is admirable as it pays off much more than it falls short, and in the court case scene, the whole production really grooves.