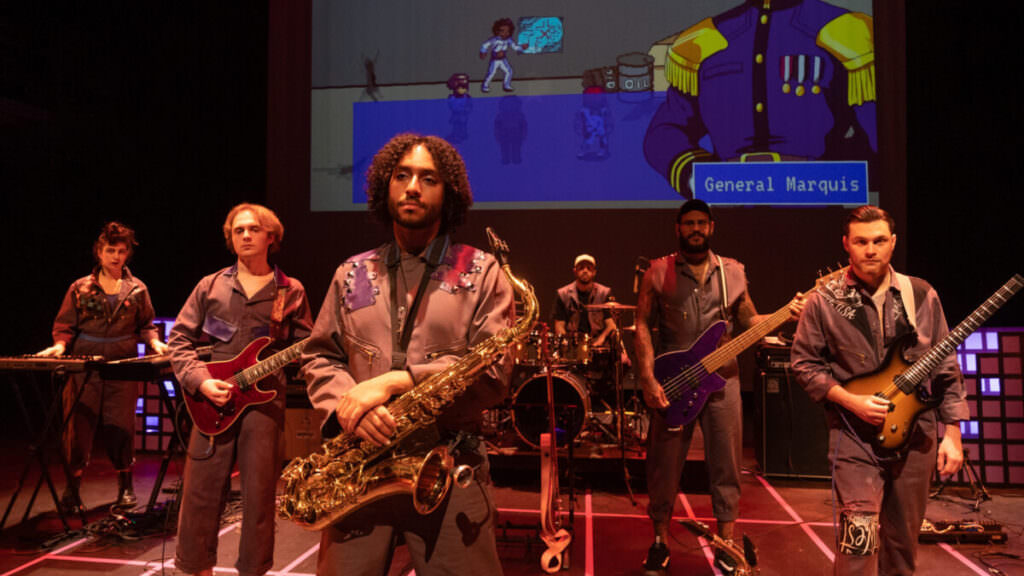 Continuing Recital’s sponsored partnership with the New Hazlett Theater, we are presenting a series of editorially-independent previews and reviews of the 2021–22 Community Supported Art (CSA) Performance Series. Below is our review of Disassembly by Feralcat, a collaborative response from Recital editor David Bernabo and guest panelists Matt Aelmore and PJ Roduta. Read their bios at the end of the review.

Before we start, I should be honest. I’ve been procrastinating on writing this review. Yes, it’s been hard to string together a few hours of free time to write lately, but this is partly because after watching Feralcat’s multimedia performance Disassembly, I’ve often found myself on Youtube watching gameplay videos. 10 hours of the bizarre, laws of reality-testing 2019 action-adventure game Control? Yeah, I’ll skim through that. A deep dive into David O’Reilly’s surreal Alan Watts-narrated Everything? Yes, I’m 100% here for rolling bears and giant space harps. Cap it off with object-altering games like Superliminimal and Katamari Damacy? Sure!

These selections certainly say more about me than Disassembly, but as a person who wasn’t allowed to own a video game console until my late teens–admittedly, I would have been on that thing all day–I love watching other people play video games. I have no desire to go around and virtually murder foes with swords or bullets or spells, solve puzzles, or world-build, but I’ll gladly watch someone else do it–meaning, watching Disassembly was an easy sell.

Feralcat, so far, has been known for music–precisely-delivered jazz fusion (I suppose) that is at times smooth and sleek or barbed with influences of metal and prog–but Disassembly is an evolution of the Feralcat project’s scope. It’s a leap into storytelling via video game cut scenes–you know, those movie-like sequences in a video game where the user has no control over the action (“cut away from the action”) and, often, plot is developed. Styled in glorious 2D pixel art along with more glossy character portraits, these scenes are projected onto a stage-wide screen. Underneath these plot-guiding projections, Feralcat, performing in both solo and band settings, soundtracks the story while clothed in futuristic jumpsuits with uneven pant legs on a colorful, Tron-like grid of light protruding toward the audience.

The plot involves a tale of technology run amok. Cyborgs created by humans evolve to a point where humanity is in the way. The humans, in order to save themselves, have to destroy the mainframe that is effectively sustaining the cyborgs.

This framework allows for a number of fun details. The human president has the initials AOC while MAGAisms are peppered into the cyborg’s messaging. The cyborgs use their eco-conscious accomplishments to effectively greenwash their true omnicidal goals. And there is a possible nod to Francis Ford Coppola’s use of juxtaposition in The Godfather films when the wedding of Ignacio and Eden, our main characters, is paralleled with a cyborg attack. Bonus: Feralcat’s consistent use of a salute to cue the next video emulates a level ending move like how Mario or Luigi throw a peace sign when they slide down the flag.

Despite focusing on video games, Disassembly is akin to a live-scored silent film. These kinds of events have been happening in Pittsburgh (and elsewhere) for some time, often at the Three Rivers Film Festival. (The Alloy Orchestra frequently scored a silent film classic to open or close the festival, and in 2003, supergroup Text of Light paid homage to the Stan Brakhage film that provided the band’s name.) The contemporary live score allows musicians to play composed or improvised music alongside a silent film, which historically would have had a pianist or organist performing at each screening. In these settings, the film is a fixed length and the musician is beholden to the moving image in regards to timing. Interestly, in Disassembly, the music dictates the length of a scene. If the song is four minutes long, the cut scene may loop for a bit until the music reaches a certain point. Feralcat, in our preview interview and in the post-performance Q&A, discussed how pre-existing songs were the initial basis for the early storyboarding and game development. Later, more songs were written and the story was expanded.

Earlier when recounting the plot, I was hesitant to get too detailed. Aspects of the story were lost on our panel. There are deceptions embedded in Eden’s storyline, and there’s some sort of meta-reality where Ignacio and a scientist recount a dream (or was it reality?). The story also presents questions about transhumanism, transforming hate into something constructive, and ideas of healing and community.

The review panel’s confusion on key plot points was due to two things. 1) The narrative reasonably has a few gaps. The video game and overall story are still in-development. It’s safe to assume that this performance is a work-in-progress or perhaps more appropriately, a resting point in an ongoing project. There are Seinfeld-esque yada yada yada moments where one scene presents a dilemma or task and the next scene quickly resolves it.That’s not how an audience traditionally digests a story, but given this project’s current scope, it is appropriate. 2) On the whole, the plot is followable, but the music and the video images are both powerful draws for the audience’s attention. If you strictly follow the screen, sure, you can grok the story, but you will miss out on the complexity of the music–the time signature changes, the intense grooves, and the power of Feralcat’s impassioned melodies. If you are tempted to look down–maybe your eye wants to place where those gnarly guitar solos are coming from–you may miss a crucial entrance of a character or a set of characters or even a temporal reality shift. Within the performance, there are hints at choose-your-own adventure capabilities, but the audience lives that choice: story or music?