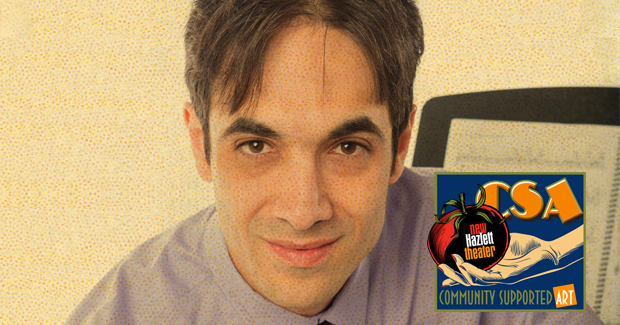 The piano is a marvelous piece of engineering, elegant in its relative simplicity. It’s mostly a series of simple machines, pulleys and levers. Press a key, a felt covered hammer strikes a high tension length of wire, and sound is produced. Of course that doesn’t begin to describe the wide range of sounds and colors a fine piano is capable of producing, nor does it describe the almost symbiotic relationship that some people develop with this device. It borders on the magical.

Using the keys to create notes is only part of the instrument’s capabilities, as composer and pianist Federico Garcia-De Castro stated to the audience after Thursday’s concert. He argues that the strings and resonant box of the piano, and the performer’s ability to play them, are just as much a part of the instrument as the “traditional” manner of playing it.

The technique of playing inside the piano is credited first to composer Henry Cowell, whose Aeolian Harp was published in the early 1920s. His student John Cage zealously took up the idea with his development of the prepared piano (1940s) in which various objects are inserted between the strings. The result is to place a percussion orchestra under the fingers of a single pianist.

For the first performance in the 2014-15 CSA series, the underlying theme was the range of possibilities for both “inside-outside” duo piano playing. Mr. Garcia-De Castro was joined onstage by Daniel Pesca, a fine pianist originating from the Eastman School. Two pianos were on stage, lids removed and lit from within, in an otherwise stark theater setting. 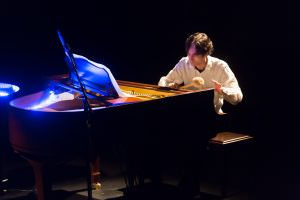 The concert began with Mr. Garcia-De Castro’s arrangement of Au Convert (At the Convent) by late 19th century Romanticist Alexander Borodin. Originally a work for solo piano, this arrangement (or reimagining?) of the piece sets each player off the other, each producing notes and sounds in both the traditional method of fingers on keys, and a variety of less traditional techniques directly on the strings themselves. The results dramatically increased the color palette of the two pianos, giving the piece and even more impressionistic feeling than the original.

Following this work was Interference by Simon Eastwood, for two performers on one piano. Rather than the “piano four hands” with both players sitting at one keyboard, in this piece Mr. Pesca played only the keys of the instrument, and Mr. Garcia-De Castro played only on the open strings. Many of the sounds were created by muting the strings with palms of the hands, strongly emphasizing the percussive side of the instrument and recalling John Cage’s prepared piano. A particularly novel effect was to have the string player mute the strings and move his hands along their lengths; when played on the keys, a string of moving harmonics was produced. That effect is easily produced on guitar or bowed strings, but very rarely heard on piano.

The latter portion of the concert was devoted to Federico Garcia-De Castro’s compositions. His Rendering for solo piano was a beautifully (modern) impressionistic work, mercurial in its fleeting ideas. It occurred to me: Borodin, as a latter-19th century composer, is pushing at the limits of traditional tonality. Garcia-De Castro, as a living composer, writes chromatically and densely at times but is unafraid to “thin out the clouds” and compose passages that arise as being more-or-less tonal in nature. Borodin is on the outside of tonality looking out, Federico is on the outside looking in. It was a treat to here the premiere performance of this work, sympathetically played by Mr. Pesca. 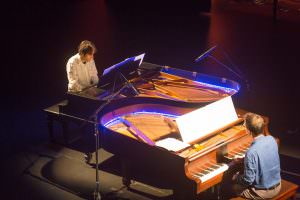 This led to the centerpiece of the concert, the Livre Pour Deux Pianos (Book for Two Pianos).  Split into five movements, this work more than any other on the program explored the possibilities of two pianos. At times melodic material was passed from one player to the other. Sometimes the events were short, chopped, and full of silences; at other times, the two pianos created dense polyrhythmic webs of sound. The final movement was dramatic and demonstrated the full dynamic range possible of two pianos played simultaneously. One audience member commented that this movement would have felt at home in a work by Modest Mussorgsky, again recalling late 19th century Russian Romanticism.

Throughout the concert, the pianists played with both accuracy and passion, on music that was quite difficult at times. The sound in the Hazlett works well with concerts of this nature, and the clarity of the details came through beautifully. The pianists’ efforts were clearly appreciated by those in attendance. It was a great start to a promising CSA season!