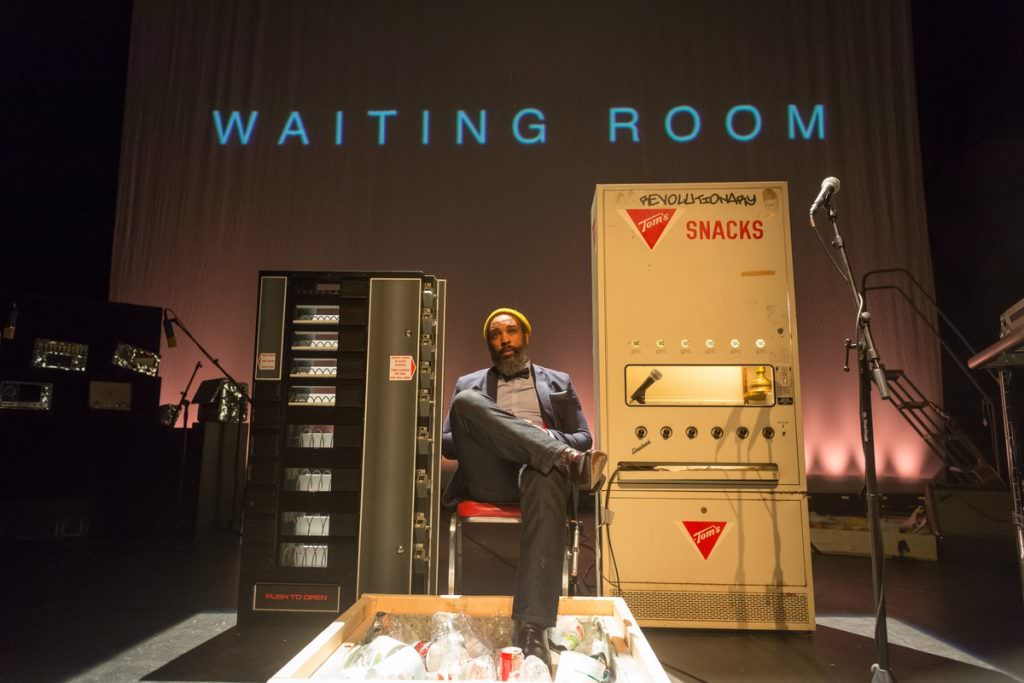 Ricardo Iamuuri’s “A BRAND NEW WORLD: kill the artist” dared to transform space within the human consciousness even as it transformed the Hazlett into an interdisciplinary display of displacing, magical sound, vocal mastery, and stunning visual media that challenged notions of freedom, consciousness, “branding,” war, violence, cultural co-opting, and commodification. Though experimental in scope, its themes were accessible across individual and cultural memory, from old black and white commercials for household coffee to a video montage of The Towers consumed by thick, black smoke that placed the audience in the long, dark horror of 9/11–a horror that can be conjured in a second, in a heartbeat, as if it lives just there, beneath the surface skin and goes down into the marrow of our everyday living. All it takes, Iamuuri suggests, is a trigger that calls it up where it refuses to hide, and we cannot bury it. There were tears as Iamuuri climbed a ladder and sailed paper planes into the air, in front of the projected image of the Towers as they burned and burned and eventually fell. The air in the Hazlett became thick with the painful memory forever lodged in the throat. Combining the dynamic whimsy of paper planes–which brings us back to childhood gaiety–with the awareness that two actual planes controlled by terrorists hit The Towers–was painfully ironic, a suggestion, perhaps, that there is no safe place for our memories or the pain attached to them. Yet there seemed to be another meaning, whether Iamuuri intended or not: there are bodies and interests in the world that seek to control us, manipulate us, use us, and discard us as easily as a child might toy with a paper plane. We are must valuable when we consume, “A BRAND NEW WORLD,” suggests.

Iamuuri is the main character, an artist who moves through each station on the set, which produces uncanny, provocative, unique sound, from an electric coffee grinder filled with “cool beans” taken from a bag thusly labeled; to several transmitters where Iamuuri created “freestyle” sound frequencies reminiscent of the opening music of “The Twilight Zone” or the original “Star Trek;” to a wooden box filled with plastic bottles that Iamuuri stepped on and moved with the tips of his shoes. At times, the sounds compete with the storyline, which makes it difficult to follow. I wonder, though, how intentional this is, like the act of rapidly clicking through channels and being bombarded with images that we cannot readily understand but, nonetheless, affect and persuade us. 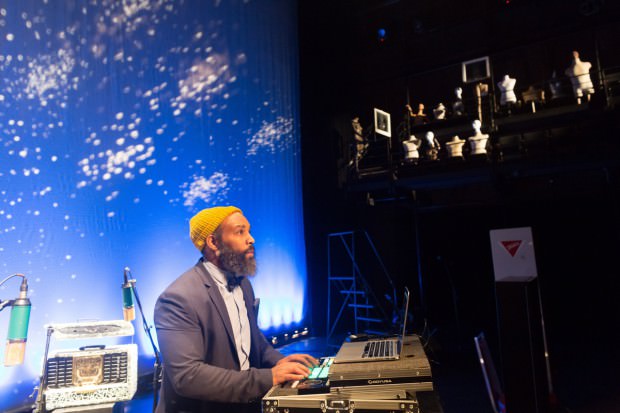 When Iamuuri sings, “My friend, try to moderate your indignation and keep your cool…you’re all on fire,” a new world is born and made, one of dis-ease whose only comfort is his voice–and you want to crawl into the effortless power of his voice and breathe there and make your meals and love there–for to say he can “sing” is an understatement. He knows the art of his voice and blends the blues with R&B soul, reggae, and folk. To hear him is to hear Marvin Gaye, Bob Marley, Curtis Mayfield, Bob Dylan, and Muddy Waters in one transcendent voice. The ache for more of Iamuri’s singing brought a slight conflict. Because of the many ways the mind and heart are transformed during the show—and because of the urgency of unusual sound–the viewer wants a place to sit for a moment. And be still. And safe. Out of all the sounds, the place of calm and comfort, the place that said, as Kendrick Lamar teaches us, “we gon be alright,” was Iamuuri’s voice, rising and falling in its controlled power, in its surety.

When Iamuuri takes a seat in a part of the set termed WAITING ROOM, we do not know if his character is standing trial–as promo for the show and even the “kill the artist” subtitle suggests–or if he is ill and must be treated for his sickness, a sickness that seems to be his perceived subversion by those determining his worth, in this world that only wants you to stay mute, stay broke, or stay trying to buy what you cannot afford, or what cannot be bought, like joy and peace. Either or neither could be true, especially because Iamuuri seems less concerned with attached ideas of what the show “is” or “means” or how the audience should interpret it. Like sound, the show is fluid in interpretation. Iamuuri seems most at home with the dream of creating and doing what is rare on stage, like using a hydrophone to capture the sound of an apple being dropped into a tall bucket of water. The sound landed like a drop of water in the heart–the hearing of it was that clear, that unusual, that profound, and that specific, like pulling the music of the universe to a needlepoint. Then listening. The metaphor of “The Big Apple” and the falling Towers were brought down to a tangible place where the audience could retrieve it. If we wanted, we could have touched the apple. And yet we could not have touched that sound. Questions emerge, like the desire for the apple and the way we want to hold on to survival and the things we need and the things we love and the things we desire: Who is playing with our lives? Our water? What we eat and consume? What role(s) do we play in our fate, future, and financial power? Iamuuri does not answer these questions, and he shouldn’t.  It’s our job–as audience, “citizens,” and consumers. Yet all we do, Iamuuri seems to suggest, is being observed.