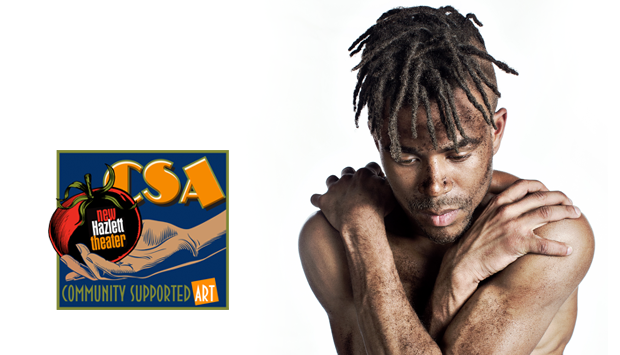 Yona Harvey, assistant professor of English at the University of Pittsburgh, sat down to talk with Anthony Williams about his performance for the New Hazlett Theater Community Supported Art Performance Series, Loving Black.

“If I was telling on somebody, I had to sing a song to tell.”

Loving Black implies two ideas.  There’s loving as an action and loving as a descriptor. How did you first begin thinking about these ideas?

When I first [performed Loving Black] at the Alloy Studios, in 2014 [I asked], “How do we love black?”  This version [at New Hazlett] moved into the space of, “How do we love this person named Black?  And the ways in which we do that.  And I definitely went back and forth [between the two ideas].  Do I want to make this a political statement?  Yes.  Do I want it to be literal?  No.

What do you mean by that?

[I asked myself], “Do I want to continue to make an overall or generalized statement about how black people are loved?”  I wanted to move away from that.  I wanted to get really specific…  [focus on] the effect that choice has in love.  So when we choose to love a certain type of blackness or when we choose not to love a certain type of blackness, how does [our choice] affect the person?

At your rehearsal the other evening, I thought I heard echoes of Ntozake Shange’s choreopoem, “for colored girls who’ve considered suicide / when the rainbow is enuf.”  Is that correct?  Were you thinking about that?

No.  I wasn’t thinking about that at all.  So I actually was really pleasantly surprised because it added another [layer] of content I didn’t foresee.  That whole scene is about flamboyant boys being flamboyant in a comfortable, safe space.  That’s really what that’s about.  And it honestly represents the adolescent, gay, black boy who’s over-the-top and really cast out by the community and has to find friends who are like him and needs to be able to feel a sense of [comfort] with his comrades…

I’m not sure once you get a second listen if you’ll have that thought [of Shange’s work], but it was damn cool when you said it.

I noticed, too, in that rehearsal that [there seemed to be] a lot of trust among you and the dancers.  Is that true?  Have you worked with [everyone] before?  How does that trust work –

–In the process?  We did not have a lot of trust at the beginning.

Ironically, you call them “dancers.”  But I call them “performing artists” because they are doing more than dancing.  They’re speaking and singing.  What you saw definitely evolved from a series of questioning.  I’m wearing a lot of hats I’ve worn before, but never at the same time.

Everyone picked up on that and knew that.  And in that first week, everyone didn’t understand.  [They asked], “Why do we do this?  What’s the intention for that?”  They question it…  And then a day later they go, “Oh, okay, that’s why you had me do that!”

When you’re rehearsing, do you leave space for changes… for yourself or for [the performing artists]?

I think that’s what you saw.  I’ll give them structure… and then I always say, “Now let’s play.  Let’s play with these ideas.”  I’m very strategic… but there’s a balance between me directing [the performing artists] and [them] organically moving through the work.

How do your previous training experiences inform Loving Black?

Since I was 14, everything I’ve participated in [or studied] has come up in this show.  I play the trombone.  We [perform] the color guard.  Dancing. Acting. Singing. Miming.  Costuming.  I’m doing all of the costumes.  Everything I’ve ever studied is coming through me in this production.  I’m giving it everything I have.

What do you want audiences to take away from Loving Black?

This [will] sound so unprofessional.  But I want them to be emotionally engaged.  I want them to walk away with inspiration to continue the conversation about young black boys who are gay, who are not straight-acting, and who really aren’t talked about.  The black community is still rooted in the Christian belief of heterosexual versus – versus – homosexual.  And it’s interesting the amount of tolerance I see in my own personal experience for our white counterparts.  It is so interesting.

So that speaks to what you [mentioned in the Indiegogo video].  You mentioned wanting to expand what black masculinity means – it’s fixed in people’s minds.  And you’re opening that up.

This production isn’t about “this is black masculinity” and “this is not.”  It is literally the telling of a story.

Why do you think it’s important to make that distinction?

It’s important because at the end of the day, I want this to take off.  So if I tell the audience what they’re supposed to think when they watch it, that limits my audience.  But if I give them a story that’s authentic and encompasses [multiple] experiences… then I think my chances are better for educating my audiences… on the ideas of black masculinity, youth, and the effect of losing your parents.

When folks are like, “Is this your personal story?”  I have to say, no.  [But at the same time], it is my story.  I had to experience things like this.  I think everyone in the cast experienced moments like this.

I challenge people to think about times in their black community when they knew someone was different.  And if you didn’t [speak up] and you felt like it had nothing to do with you, why is that?

Because if you define community in the most American way, [which is to say] that my community is anybody with the same color skin as me, then, I’m sorry, you’re not a part of mine. And I’m not sorry about that.

In this story, Black loses his mom because she’s addicted to drugs.  Black’s father didn’t understand Black was an artistic kid who wanted to play.  And wanted to do things that were different.  Why are those things labelled as feminine?

Because it takes away a lot of stress.  And when we are most creative I think it’s during playtime.  When I’m teaching, the children will feel freer if I ask them to play.  Adults have a difficult time – they overthink.  When we use words to free them up, more magic happens.