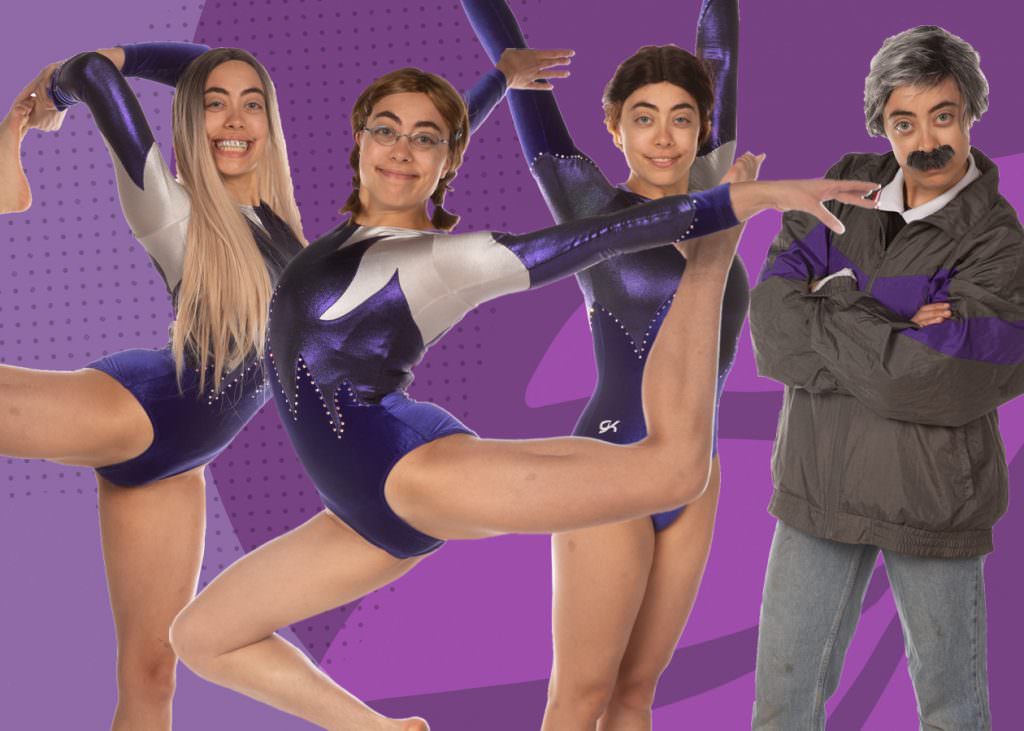 Secret Lives, Gymnastics, and the Absurd
Anna Azizzy plays every character in ‘The Secret Life of Gym Girls’

Beneath the watchful, stony gazes of Discobolus, Athena, and Apollo — their bodies elegant and graceful — and Nicole Eisenman’s roughly-defined, plaster sculpture, Prince of Swords with its slumped back and singed hands, stands interdisciplinary artist Anna Azizzy. They’re in a bathing suit, emulating the act of swimming in the middle of the immense sculpture hall at the Carnegie Museum of Art. (The museum is open late tonight, a handful of activities and performances activating the large museum.) There is a screen behind them. Rear projection places a number of characters — young gymnasts between the ages of 9 and 16, all played by Azizzy — into a luxurious swimming pool scene. As Britney Spears’s “I’m a Slave 4 You” plays, the girls have an impromptu diving contest where the loser has to eat a large dish of steamed shrimp. This is just a quick peak into the surreal and absurd world of Azizzy’s evening-length multimedia performance, The Secret Life of Gym Girls, which premieres at the New Hazlett Theater on December 5 and 6.

Check out the tagline: “While together at the gym, they are seemingly happy in their world. Apart, their queer and unusual desires are revealed.”

The Secret Life of Gym Girls builds on Azizzy’s undergrad thesis project For Retired Gymnast, an 18-minute video piece. “It’s the same cast of characters, the gym girls, their coach, and their mom, still struggling to keep their most shameful secrets from the rest of the team,” says Azizzy. “I have a huge web of all of these characters’ lives mapped out. For Retired Gymnast took a nibble out of that, and The Secret Life of Gym Girls takes a big bite! The gym girls have been such an important tool for me to process and practice my own identity, my queerness, my shame, and I’m certainly not at the end of that process.”

And everybody has a few secrets. Harper Frances, 13, literally hides her budding interest in Meredith Monk, noise, and freely improvised musics under the bed when her friends visit. Harper’s mom has literally and figuratively been having her “portrait painted” every week for the past 15 years.