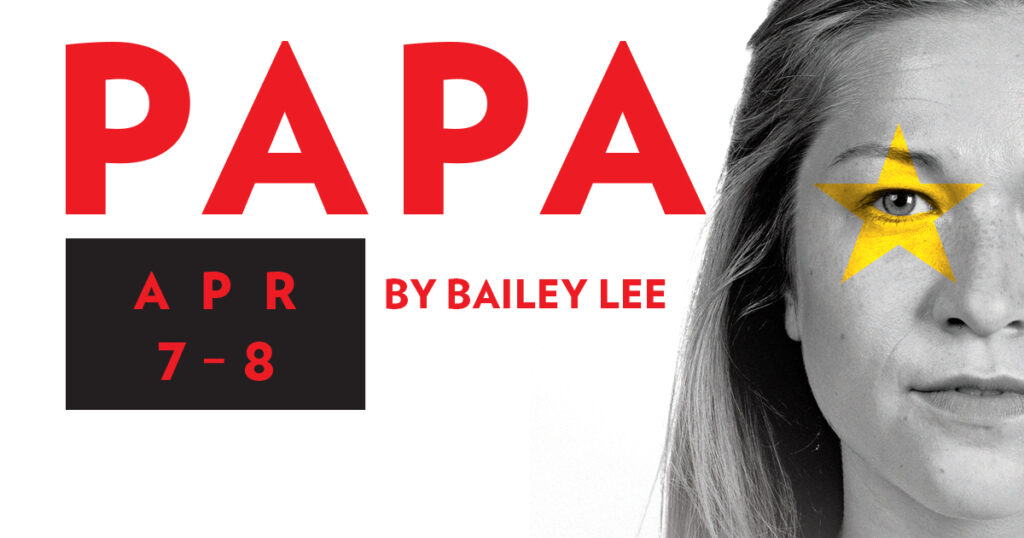 “Everybody needs somebody to witness their life and to know that they were here and that they made a difference.”

An interview with Bailey Lee on the play, “Papa”

In Bailey Lee’s Papa, the viewer journeys from the farmlands of rural China to the hills of McKeesport, celebrating Asian American heritage by exploring the Lee family’s memories, fantasies, and heartaches through drama, music, and puppetry.

The performance is part of the New Hazlett Theater’s CSA series. There are three performances on Thursday, April 7 at 11 a.m. and 8 p.m. and Friday, April 8 at 8pm. For tickets and more info, click here.

Read our interview with Bailey Lee below!

David Bernabo: Can you tell me about your papa?

Bailey Lee: I’m creating this play for my papa. My papa immigrated from China somewhere between the ages of eight and 15 to McKeesport, PA. He finds his life very uninteresting, and I find it very interesting. This is a play to celebrate and uplift him and Asian Americans. My relationship between my papa and I crosses generations and countries. We have very little in common, but he has made me who I am today. When I was 15, my father passed away unexpectedly. Since then, every conversation that I have with my papa is in relationship to the loss of my dad. So, this is a play about generational grief and love, the dreams that we sow into the generation to come after us, and the hope that we put in them, even if lovingly in the name of assimilation. This is an original Chinese American McKeesport play, and I’m so happy to get to make it in Pittsburgh for Pittsburgh.

DB: Is there a lot of immigration from China to McKeesport?

BL: Well, it’s interesting, I actually I found a newspaper article about a restaurant that my grandfather owned. I didn’t know he owned or operated a restaurant. I found out that he owned and operated the only Chinese restaurant in McKeesport. So part of the play takes place in Yee Wah’s Chinese Restaurant on Walnut Street in McKeesport, which was torn down to build a parking lot for a mall that never got built. So, the play is about those bittersweet moments–the things my papa has poured into me.

But no, it’s not to say that Pittsburgh doesn’t have a large Asian American or Chinese American population now, but when my grandfather came, everybody knew Hall Lee because he was one of the few Chinese men in McKeesport.

DB: Do you know what year he moved to McKeesport?

BL: He immigrated in 1935 and lived in McKeesport most of that time. As I’ve grown up, I’ve learned that he lived in Brooklyn, New York. I told him I was moving to New York and he said, Well, I lived in Brooklyn. I was like, You lived in Brooklyn? So, that’s my relationship with my poppa. He’s a man of many secrets, lovingly hiding them in assimilation. Our relationship is the constant revision and reworking of stories and how those stories shift my perception of my identity, as the markers of homeland keep changing.

DB: Given that you are still discovering aspects of this history and that there is a weight of responsibility to tell the story of people you know and love, can you speak to the writing process of Papa?

BL: So I applied to the CSA with just an idea for this play, and over the past year, with the theater’s resources, I’ve been able to create that play. I’ve created it from collecting reference material, interviews, and stories of my past. This play is semi-autobiographical. Ultimately, I think we all have our own versions of history and memory. So this is mine, and I hope it’s uplifting and honoring of my grandfather and of the sacrifices that they’ve made for me. But this is just my expression of loving the parts of me that I got from him, loving the Asian American parts of me that I carry with me, whether they’re seen outwardly or not.

DB: Growing up, did you see media that you thought reflected your experience?

BL: No. I grew up with my father, who was half Chinese and half White and who looked so Asian. So when I would go with him to the Grand Asian Market, I would always be asked if I was adopted. I never knew quite where I fit. So, this play really explores self-perception and identity, because when I see a Chinese man, I will feel infinitely safer with them. I see all of this Asian hate that’s going on, and my heart just breaks because that’s my family, even though I walk through the world with a lot of privilege and I’m very White-presenting. I think I just have a heart for my family and the Asian American community at large. This is my way of holding a stake in the ground for them and celebrating this community that I get to be part of.

DB: You mentioned that part of performance takes place in the restaurant. Can you walk me through some of the other mechanics of the performance?

BL: Yes, the play is performed by three actors who play multiple characters throughout the night. We go to many different settings. You journey with the character Bailey, a young, mixed Asian American artist as she recollects, reexamines, and revises the past. We go to different eras. We have scenes in my grandfather’s Chinese restaurant. We have scenes in my Papa’s home in downtown McKeesport. We have scenes in-between spaces, in Bailey’s imagination. There’s a fusing of eras and perspective, and some things are anachronistic. Some things don’t make sense. There’s folk stories, some puppetry, some dance, humor, I hope, and definitely a lot of heart. So it’s a very full evening.

DB: Are there other themes within the work that you want to share?

BL: Themes that I’m working with for this piece are generational hand-me-downs–what we intend to give and what we end up inheriting. The distance between family members. The fragility and versatility of memory. Homeland grief. Asian love and celebration. And also, it’s a play I hope that is a little bit of a balm for anyone who has ever felt in-between.