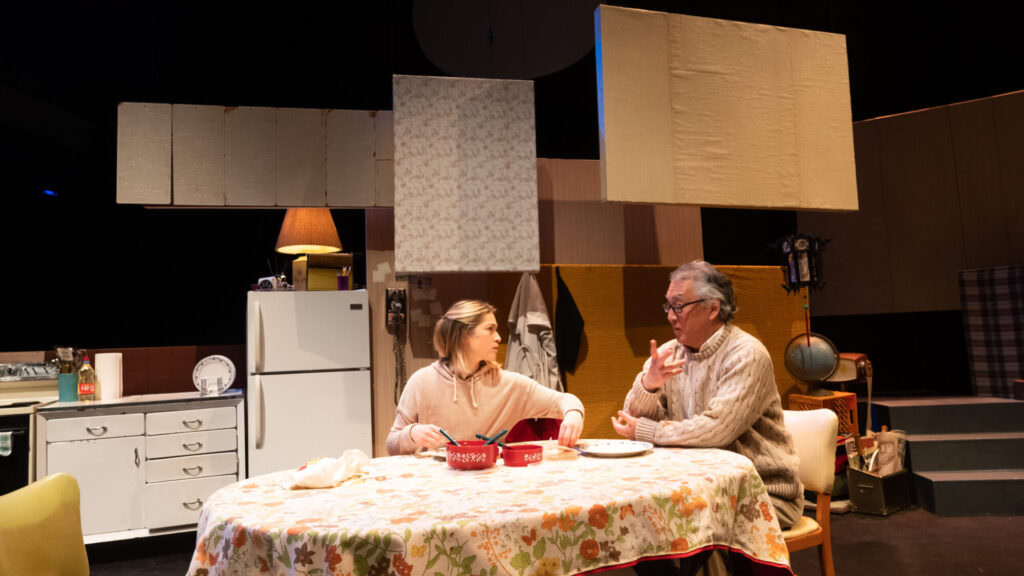 Playwright Bailey Lee puts the age of her beloved grandfather, Hall Lee, at 87 years, but it comes with a caveat.

“It’s a little bit funny because we don’t know his exact birth year,” Bailey says of Hall — or, as she calls him, Papa — who, as a teen, emigrated from rural China to the small western Pennsylvania town of McKeesport. “So every year for his birthday, we put a question mark on a candle.”

Hall serves as the inspiration for Bailey’s play Papa, set to stage from Thu., April 7–Fri., April 8 at the New Hazlett Theater. Presented as part of its CSA Performance Series residency, which supports artists as they develop a new work for the New Hazlett stage, the show is described as using drama, music, and puppetry to recount Hall’s journey, and “unpack the Lee family’s memories, fantasies, and heartaches, tracing the complicated relationship between three generations of Asian Americans.”

The small cast includes actor Bailey as herself, Arnold Y. Kim as Papa, and Francis Dell Bendert as Bailey’s mother. All the actors will also take on other roles throughout the play. While Bailey, an actress, writer, and “theater-maker,” has produced other works, the idea for Papa has stuck with her as a far more personal project.

“So this has been a play that’s been with me for a long time,” says Bailey, who worked on Papa with her husband and creative partner, Coleman Clark. “I’ve had the seed of it for a while.”

Though she lives in New York City, and Hall has moved in with a relative in Chicago, Bailey felt that Papa should stage in Pittsburgh, especially since her grandfather was such a fixture in nearby McKeesport. She believes her time with the CSA Performance Series gave her the perfect opportunity to make the show a reality.

“Very rarely will an organization open up resources and support to something not yet fully formed,” says Bailey. “And that’s what the New Hazlett has done for me. They accepted me as an artist, and with this idea, and over this year, has been a support system for me, like an incubator, a true incubator for me as an artist.”

She adds that, while she initially envisioned the show as a staged reading, the CSA residency gave her the freedom to bounce ideas around and let the concept grow.

“And through their encouragement in partnership, it’s now bloomed into a full production,” says Bailey. “So really, this piece would look completely different if it wasn’t through the partnership with the New Hazlett.”

Papa covers the relationship between Bailey, her late father, and Hall, who she says came to the United States in the mid-1940s. He worked at one of McKeesport’s first Chinese restaurants (“There’s a funny old article about it in the paper,” Bailey laughs), which was owned and operated by members of his family. He then attended two years at the University of Pittsburgh, got married, and became a draftsman for Westinghouse Electric, where Bailey says he stayed for most of his career.

Bailey calls her grandfather “one of the most selfless people I know,” adding that he “left a lot behind in his immigration,” repressing much of his Chinese heritage in order to assimilate into American culture for what she calls “the safety and benefit of our family.”

“And my Papa is a man of few words and many mysteries,” says Bailey. “So I’ve always grown up deciphering his stories in different ways.”

Further complicating her relationship with Hall was the unexpected death of her father when she was just 15 years old. “Since then, every conversation that I’ve had with my Papa is in relation to the loss of my dad,” says Bailey, adding that the play not only covers her grandfather’s sacrifice, but “generational grief and love and the dreams that we sow into the next generation.”

Even with the heavy subject matter, Bailey says the play will depict “all the fun and chaos that a family is.”

“It’s fast paced, it’s a lot of fun,” says Bailey. “It has moments that I hope are really funny, and moments that I think will pull at the heart, I hope.”