As part of The Glassblock’s sponsored partnership with the New Hazlett Theater, they are presenting a series of editorially-independent previews and reviews of the 2016-2017 Community Supported Art (CSA) Performance Series. Below is the beginning of their review of Midnight in Molina by Cole Hoyer-Winfield, a collaborative response from editor Adam Shuck, arts and culture editor David Bernabo, and guest panelists Kathryn Carr and Derek Reese. Read the entire piece here. 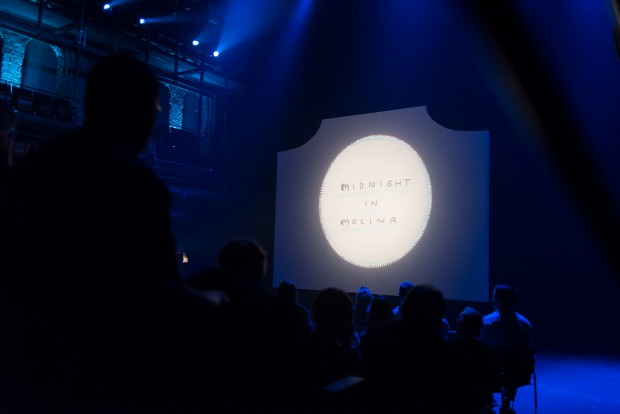 It starts with a jolt. A “wheeeee,” a “yeaaaah,” a burst of drums, keyboard, bass, and guitar; and in lightning-fast succession, an illuminated projector throws an explosion of illustrations against the screen. On October 20, Cole Hoyer-Winfield’s Midnight in Molina kicked off the first of the New Hazlett Theater’s 2016-17 CSA Performance Series. Narrated by Hoyer-Winfield himself and voice actors Christian Mocombe and Daniel Valentine, with musical accompaniment by Matt Breslof, Sam Molstad, Jeff Ryan, and Swampwalk, Midnight in Molina is a story told in two timelines using imagery from a hand-rotated crankie and an overhead projector, and within the first few minutes the audience is served all of the structural elements that will be used to construct a fantastical tale of curiosity, nostalgia and memory, and the supernatural.

In our preview of Midnight in Molina, we learned about the “crankie” and the artistic background that led Cole Hoyer-Winfield to take it up. Sure enough, the main performer is this inanimate object, a mechanistic novelty that unspools a roll of hand-drawn illustration on sheets of transparency. But as we progress through the story, we’re shown images from an accompanying instrument. While the crankie throws up a relatively smooth progression of imagery, the overhead projector presents a contrasting style, a series of static images that details the historical background of the town of Molina. These parallel—and later intersecting—storylines, which trade off as the primary storytelling voice throughout the performance, give Midnight in Molina a vital breadth and depth despite some initial abruptness of pacing.

Eugene, our main character, voiced by Hoyer-Winfield, is a travel journalist, and he prides himself in his work—especially as it allows him to travel all over the world. As the story first unfolds, we tag along with Eugene as he zips on his bike around the bustling city he lives in. His life is active and full, if not a bit stressful, and in his day-to-day he contends with a routine that verges on the monotonous, a sniping rival named Chaz, and a threatening rock that his bicycle always seems to aim for. When he is assigned to cover a festival in his hometown of Molina, it comes as a welcome respite.

While Eugene’s home base is quick-paced and active, punctuated by regular caffeine-fueling at a crowded coffee shop, Molina is laid back and familiar. Back at home, Eugene reconnects with his childhood friend Frank, who’s given a delightful Pittsburghese inflection by voice actor Daniel Valentine. Frank is a carefree townie who makes ends meet by pilfering bicycles and other items and selling them at yard sales. Molina is “exactly the same as I remember,” Eugene says to himself, but as he spends more time surveying Molina, he notices that, instead, things have changed. A mysterious recent rash of fires has razed some of Molina’s buildings, and in their place, new developments are springing up—a restaurant with the trendy name of Mouthfeel, a precious mustache barber shop. On the site of the old Molina town hall, a sexy new high-rise. Molina, a center of glass manufacturing turned sleepy post-industrial, is gentrifying.