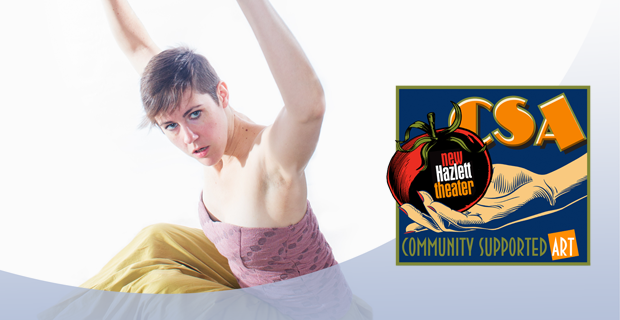 New Hazlett board member and professor of dance at the University of Pittsburgh, Susan Gillis sat down with Moriah Ella Mason to talk about Ella’s upcoming CSA performance, Contained.

Susan: What inspires you?  And how is that reflected in your work?

Ella: This is a difficult question to answer because I find inspiration in so many places – and it’s most exciting when it’s unexpected.  When I was in college I often found inspiration for my work from my academic studies.  When I was taking a class in the anthropology of religion I made a duet inspired by quotes on religious experience from a variety of traditions and backgrounds.  My studies of acting and dance improvisation led me to create a fusion work two years ago that combined improvisational dance with a narrative play and text.

Is there any thematic element or through line in the work we’ll be seeing?

The work isn’t narrative but it’s exploring the space and spectrums between these binaries our culture has created between human and animal, wild and domestic, civilized and savage.  I think of it more as a rich meandering conversation with my friends, rather than a hard statement.

Can you describe your choreographic process?

With each new work my process changes and grows.  For Contained we began with some improvisational studies.  We also used freewriting, techniques from Theater of the Oppressed, and “catching” to generate new material and variations.  We also spent time observing animals through video and translating their actions to our bodies through mimicry or through recontextualizing the actions.  Once our material became more solidified – movements set and organized – we went back into improvisational work in order to more deeply explore the emotional and psychological themes of the various sections.  We then applied the details and palette of the emotional resonance discovered in that process to the set material.  Throughout the process the dancers have had the opportunity to create alongside the given material and to adapt the given material to their own sense of character and journey in the work.  I’ve been a lucky to work with a cast that is eager to dive into this sort of deep collaborative work.  It’s been a true joy.  The piece is tailored to their experiences and understandings of the topic.

Whose choreographic work do you admire and why?

Such a big question!  I have a deep and abiding love for Pina Bausch.  Her sense of drama and theatricality and the lushness of her movement always quickens my heart.  And the list of national and international figures could go on. . .  I was greatly impressed by Baker y Tarapega’s piece at the Kelly-Strayhorn this past year; I thought it wrestled with big questions of identity and power in a nuanced and exciting way.  And I’ve learned a great deal from the choreographers I’ve gotten to work with locally.  Maree Remalia taught me so much about the importance of detail and the somatic experience in creation and performance and about how to foster a sense of community, love, and trust among collaborators.  Pearlann Porter sparked my love of improvisation and unlocked ways of dancing I didn’t know I had inside of me.  And I continue to be impressed by what I see coming from Staycee Pearl Dance Project,  Anna Thompson and Taylor Knight, and Jasmine Hearn.

When you work, do you love the process or the result?

Both, hopefully!  I do adore being in rehearsal though.  If I don’t have some sort of creative process in my life I tend to grow depressed – for me the process is necessary for life.

What is the first creative moment you remember?

When I was about 6, I used to look out the window of my parents’ car and imagine high-speed roller-blading parcour-esque dances being performed alongside me.

What do you fear, creatively speaking?

Being too heavy-handed or simplistic with a topic.  I forget who said this, but a quote I keep close to my heart is that the artist’s job in terms of social critique is to say “it’s more complicated”!

How do you select the music/sound for your choreography?  Are you moved by the music or does the choreography inspire your music choice?

Usually I begin the process in silence, or possibly using music that I don’t intend to use for the performance.  Then once the work is beginning to take shape I bring in a musical collaborator.  If the movement is interesting and compelling in silence, then once music is added to the mix it becomes even more so.  The music is built for the movement, but the music also changes the movement – ideally it makes the movement even more of whatever it is . . . it helps to draw out the essence of what we are doing.

Has the CSA program changed anything in the way you think about the pre-production, production, or post-production aspects of your work?

This is the first time I’ve gotten the chance to work with lighting, scenic, and costume designers as a professional.  It’s taught me a lot about how to collaborate with these other wonderful artists, and I’ve discovered a whole range of options in creation that have not been available to me in other spaces.  It’s also been amazing to have the New Hazlett team behind the promotion of the work.  It’s a big change from self-producing.  I have so much respect for the work they do on this series.