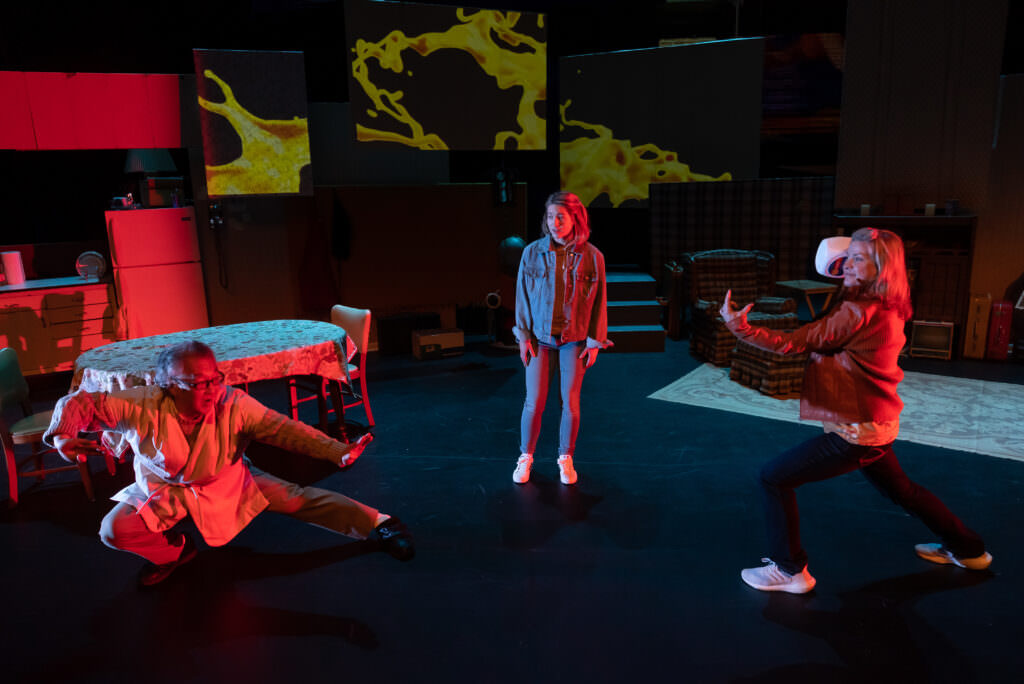 While Bailey Lee grew up in North Carolina, she and her parents regularly visited her Papa in McKeesport, where her father and mother had grown up. During the pandemic, she moved back to Pittsburgh for about a year and earned a spot in the New Hazlett Theater’s Community Supported Art performance series with her idea for the play.

“It’s a celebration of three generations of Asian Americans, and how assimilation is a factor in that,” said Lee, who is 24 and now lives and makes theater in New York City. “It’s a story about searching for homeland and letting go of those markers that we hold onto.”

The play is set mostly in Papa’s house, in McKeesport. It features a cast of three including Lee, as “Bailey”; Arnold Y. Kim, as “Papa”; and Frances Dell Bendert, as “Mom.” It gets three performances Thu., April 7, and Fri., April 8, at the New Hazlett.

While her grandfather, Hall Lee, is still alive, Bailey Lee said much about him is not known for sure. That includes his date of birth – the guess is he’s 87, but the family puts a question mark next to his age on his birthday cake every year.

Also unknown is the exact year he arrived in McKeesport, and even whom he traveled with: His own father at that time already owned what was likely McKeesport’s only Chinese restaurant; his mother remained in China; and family lore indicates he immigrated within someone known as his “second mother,” whose identity is unclear.

Bailey Lee also notes that Hall Lee’s relationship with his father, Henry King, does not seem to have extended much beyond Lee working in Yee Wah’s Chinese Restaurant, which was located on McKeesport’s main drag, Walnut Street, back when it was still a bustling mill town.

So while some of the play is based on true family history, much of it takes place in the character Bailey’s imagination.

“I grew up and heard many versions of family stories, and it was sort of funny, every time I asked the story would change a little bit,” she said. “And this play is sort of me as an adult sifting through and finding out what maybe is fact and what maybe is something that we hold onto, and what that means as those facts and stories kind of change, how they affect our identity.”

Hall Lee eventually took over Yee Wah, but closed it in the late ’60s. (Bailey Lee said it was closed to make way for a shopping mall that was never built.) He studied at the University of Pittsburgh, and went on to work as a draftsman at Westinghouse Electric Company. He faced discrimination, she said, but while he made his way, it was at the cost of things like his language and culture.

Bailey Lee’s late father, Warren, was the son of Hall Lee and his wife, a white woman from West Virginia. Lee herself has blonde hair and green eyes, and grew up without any Chinese culture.

“When my grandfather came he experienced hardship and trauma that I can’t really imagine,” she said. “And through necessity and through great love my Papa has had to put some of those things away to build our family. By repressing some language … by closing different chapters of his life, lovingly through assimilation, my Papa has built a life, but now I get the privilege of getting to make a play about it.”

The show is co-created and directed by Lee’s husband, Coleman Ray Clark.