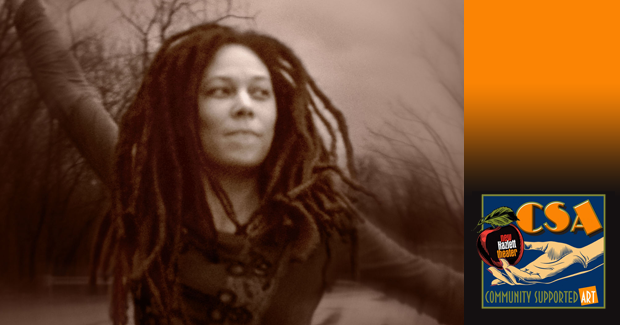 As funny as she is frank, Georgetta Holmes Stevens — “Big George” to her family and friends — is a tiny woman with an enormous personality.  Big George speaks her mind with a contagious authenticity, even when she’s going to complete strangers’ funerals.  Playwright Kelli Stevens Kane weaves a portrait of this singular woman with a spirit big enough for all of us.

A Conversation About Big George

Kelli Stevens Kane is a poet, playwright, and oral historian whose work–both on the page and in performance–unearths surprises at the crossroads of human vulnerability and possibility.Kane’s poetry manuscript, “Hallelujah Science,” was selected as a Finalist for the 2011 Four Way Books Levis Poetry Prize, and a Semifinalist for the Persea Books 2011 Lexi Rudnitsky First Book Prize in Poetry.

She’s a 2011-2012 August Wilson Center Fellow, a 2011 Cave Canem Fellow, a 2011 Flight School Fellow, and the recipient of a 2011 and a 2013 Advancing Black Arts in Pittsburgh Grant. Kane performs nationally, including appearances at the Cornelia Street Cafe and Bowery Poetry Club in New York City, and The Carnegie Museum of Art. Kane’s opened both the National Poetry Slam in Cambridge MA, and TedXWomen Pittsburgh.

In her spare time, Kane serves as Poetry Director for Radio Feebs, a Europe-based internet radio station.  Kelli Stevens Kane’s production is also made possible by a grant from The Advancing Black Arts in Pittsburgh Fund, an initiative of The Pittsburgh Foundation and The Heinz Endowments.